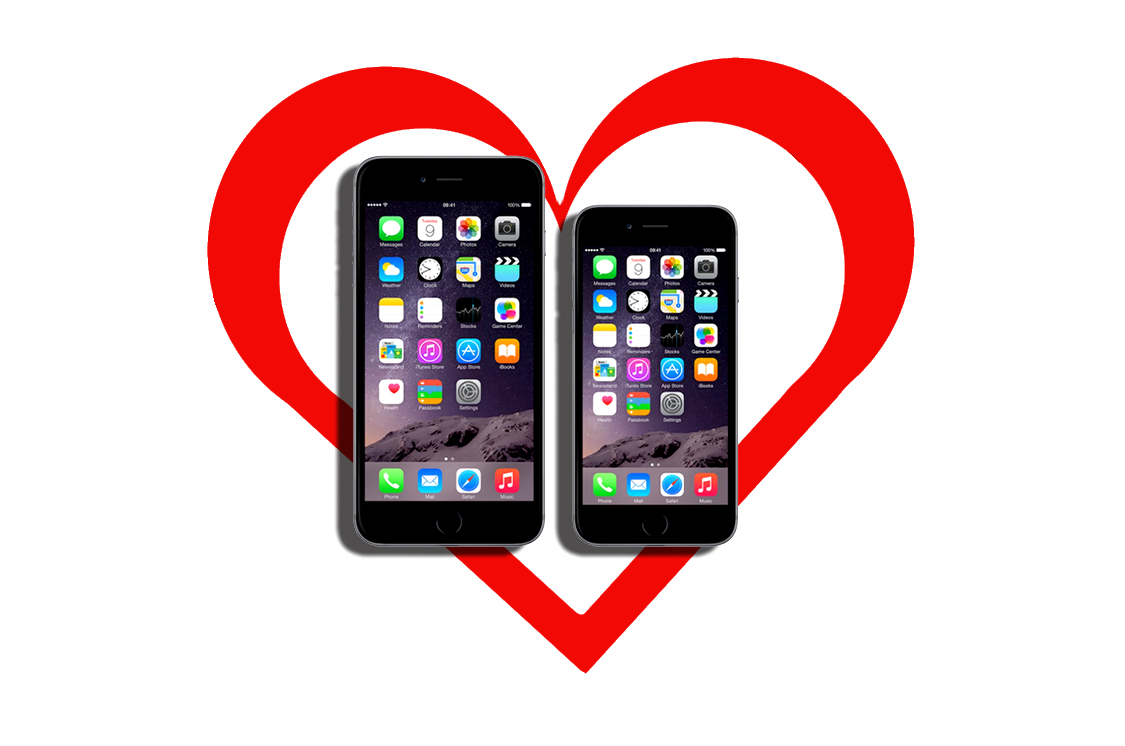 First in a series. Now that the initial excitement surrounding the launch of the new iPhones has calmed down, most of us new iPhone owners have had a chance to play around with our new devices a bit.

So what’s there to love about the iPhone 6 lineup? What do we hate? In this first article we’ll take a look at the positives. No doubt, ten million phones sold over the weekend indicate that most consider this a significant step forward for the iPhone itself, so I think it’s only fair to you and Apple to wax poetic about the good things first. Note this is not a review, but more just musings on the device itself. Every tech publication known to man has already written how "game-changing" and  "revolutionary" it is, so here we’re going to give equal time to both the fanboys and naysayers. Both camps have valid points.

This by far is the best feature of the iPhone 6 series. I was not a fan of the iPhone 4/5 design at all. It was a step back to me for a company that prides itself on cutting-edge design aesthetics. What we got was a device that more resembled an outdated candybar design which every other manufacturer had moved away from years before.

Curves are back in style with the iPhone 6. What I find most visually appealing is how Apple rounds off the glass face which seamlessly blends into the body. The design also makes the phone itself fit in the hand better. A candybar design with a larger overall phone just isn’t comfortable to hold for long periods of time.

The reduction of bulk has a lot to do with the impression that the device weighs less. Compared to an iPhone 5, the iPhone 6 actually weighs about a half ounce more (4.55 oz). You don’t notice it.

Apple admits with the iPhone 6 series that the size constraints it placed on the iPhone 4 and 5 do not work in today’s smartphone market. The iPhone 6 at 4.7 inches erases the criticisms that its display is too small -- it’s now square within the average size of most modern smartphones. For those who desire a larger size, iPhone 6 Plus’ 5.5-inch screen is about as big as you can get before one handed usability issues become significant.

I personally prefer the 4.7-inch iPhone 6 -- and it seems a lot of others do too. It still feels right in the hand, and doesn’t require two hands to use most of the time. I have held the iPhone 6 Plus too, but it’s not for me. At sizes like that, I’d rather have more screen space in a small tablet form (iPad mini), but to each their own.

Apple’s Retina HD display truly is stunning. Colors are crisp and accurate, and fonts are much clearer. Pictures and video look great on the device, and the display has significantly better visibility at indirect angles. I did notice even in sunny outdoor conditions that it was much easier to see things on the screen. That’s been a complaint for a long time and Apple has fixed it as best they could in the iPhone 6.

Finally! While it’s still an 8-megapixel camera there are noticeable differences. Autofocus is significantly faster, and in the iPhone 6 Plus you gain optical image stabilization, which makes for much clearer photos as hand shake is compensated for. But where the new iSight camera shines is in low light.

Critics (especially those from the Nokia crowd) pointed to Apple’s generally poor performance across the line when it comes to low light photography as a big negative for the iPhone in general. I have to say that the difference is literally night and day from personal use, pardon the pun. Pictures are still grainy, but significantly less so.

It is clear that Apple spent quite a bit of time on the camera to address these criticisms, and it is much welcomed by those of us that have stuck with the company since the original iPhone.

Yes, Apple is late to the party. But can anyone point to a NFC solution that has managed to see widespread adoption yet? I doubt it. Soft Card (formerly Isis) still seems mired in corporate disputes and has yet to find widespread adoption -- it’s only available in about 200,000 retail locations nationwide.

Google Wallet seems to be a little more successful, however Google itself doesn’t seem very interested in pushing the technology on a consistent basis.

Apple is taking a slightly different route, making NFC only a part of Apple Pay. It also showed during the September 9 keynote that it plans to push it as a method for in-app payment. This difference in how it is marketed to the consumer may be the answer to general apathy from the public at large when it comes to NFC.

If you program the consumer to use something and commit to it, it’s much more likely they’ll use it consistently. NFC on the iPhone 6 is not only a means to join the ever growing number of smart devices adopting the technology, but to also change how customers use their devices overall.

We can only hope that this lifts the entire wireless payment industry up, and brings a technology to the mainstream that has sat in the shadows for quite a long time.