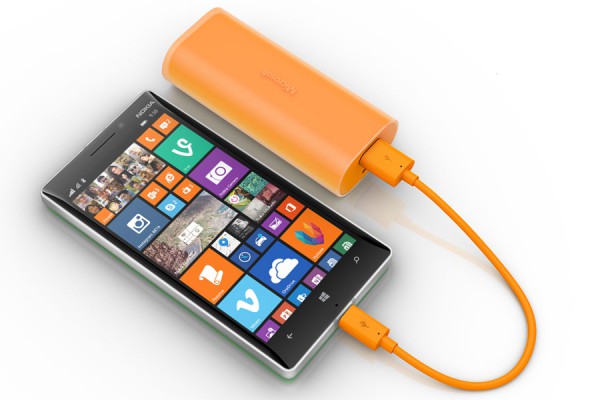 While traveling, my smartphone's always running out of juice sooner than it normally does. This leads to some frustrating moments, like being unable to make calls, open a map or send texts, not to mention having to watch the percentage indicator. Not knowing where someone is, for instance, is never great news in such situations. I know I could use an external battery charger, but I tend to avoid them, and for good reasons.

They generally tend to be bulky, ugly, and almost fragile. Getting the impression that what can only be regarded as a tool is flimsy is not confidence-inspiring -- if it breaks, it's going to be a problem. Microsoft's new Portable Power appears to be different, however. And why wouldn't it be, when it has some Nokia DNA in it?

Portable Power, which bears Microsoft's branding, is basically an evolution of previous Nokia external battery charger designs, and, as such, can be considered a well put-together device that can withstand the test of time. It looks fairly robust from what I'm seeing.

The design is pocket-friendly, which is a major benefit in my book. Its specifications say it measures 99.5 x 43.9 x 25.4 mm and weighs 145 grams. The cable length is 25 cm, which is long enough to charge a smartphone in the same pocket. Since the cable is USB to microUSB (USB-A), it can easily be swapped for a longer one -- given that you probably have one lying around somewhere.

The battery capacity is as important as the build quality and size. Luckily, we are looking at a 6,000 mAh battery in Portable Power, which equates to 22.8 Wh (the voltage is 3.8 V) -- that's more than enough to recharge a Nokia Lumia 930 two times, or nearly charge a Lumia 1520 twice. In fact, you might even charge a smaller tablet and a smartphone (maybe not up to 100 percent, but still enough to last until you come across a wall socket). Oh, have I mentioned it's got two USB ports?

To top up the battery on Portable Power, 250 minutes of charging are required; in 180 minutes it'll reach an 80 percent charge. That means you might want to do it overnight, to have as little downtime as possible. There's a battery level indicator to tell you how much is left. Microsoft says that it will hold a 60 percent charge after the first six months of use.

What's also nice is that Portable Power is rated to work at temperatures between -15 degrees and 55 degrees Celsius (between 5 degrees and 131 degrees Fahrenheit), which is reassuring if want to use it in cold and warm climates alike.

But enough of that already. Let's talk cost. Here is where (most) people will have a problem -- it costs $49 in US or €39 in Europe! It's pricey, yes -- for a similar price you can get something with a battery larger than 10,000 mAh. Still, it is up to you to decide whether it fits your needs. Me? I kinda like it, if you couldn't tell by now. Oh, and it can be had in bright green, bright orange and white!