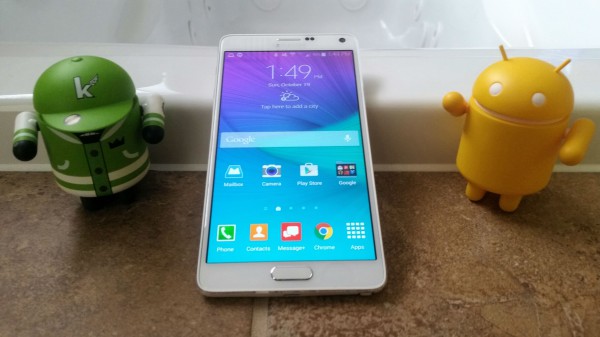 There are many times when tech pundits are wrong about things. I remember thinking the first iPad was a disaster -- who wanted a computer that did not have a USB port for flash drives? The whole world apparently, including myself, only a short while after it launched. The same can be said about Samsung's Note line of smartphones. When the first Note launched, I thought people looked idiotic using such a large phone. I mean, talking on that monstrosity in public? You look like a loon, right? Wrong there too -- people loved it and the industry followed Samsung's phablet lead. Hell, the term phablet is almost a misnomer now, as large screens have become the norm. The screen sizes we considered to be "normal" only a few years ago, are now designated with terms like "mini".

So here we are in 2014 and Samsung is still the leader of the large screen movement, although imitators are catching up. Apple got into the phablet game with the iPhone 6 Plus and even Google is set to release the Nexus 6 in conjunction with Motorola. Still, as great as the iPhone 6 Plus is, and as wonderful as the Nexus 6 is sure to be, Samsung releases the Galaxy Note 4 in hopes to remain the gold standard and the one to beat. I finally got my hands on one -- arguably the best one -- the Verizon variant, which will not be released until October 23. Yes, BetaNews has achieved it early and here are my impressions.

When taking it out of the box, it is shocking how light it is. You expect such a phone to be heavy, but it is not so. Believe it or not, it is slightly heavier than last year's Note 3 at an acceptable 6.21 oz. I have never experienced wrist-fatigue when using it one-handed. I spent a lot of time with the Note 4 at the official unveiling, but it is hard to gauge just how light it is when it is tethered with a security wire. You can see my initial experience in the video below.

The back remains plastic, but the faux-leather feel gives it a good grip, so it is not slippery like the iPhone 6 Plus. The band around the body is now metal, lending to a more premium feel. The corners are rounded, but the edges are sharp, and the overall build feels strong and industrial. Of course, you should still invest in a case, as even the most care-conscious owner can drop it by mistake, despite the good grip.

Once powered on, the screen becomes the star of the show. The 5.7 inch display is now Quad-HD, or 2560 x 1440. This is the same resolution as the LG G3, but Samsung's technology produces a much more vibrant experience with eye-popping colors and detail. Viewing photos and watching videos are awe-inspiring, as the media pops, and feels alive. Hell, even watching iJustine dressed up as Libby the Lobster on YouTube looked great! 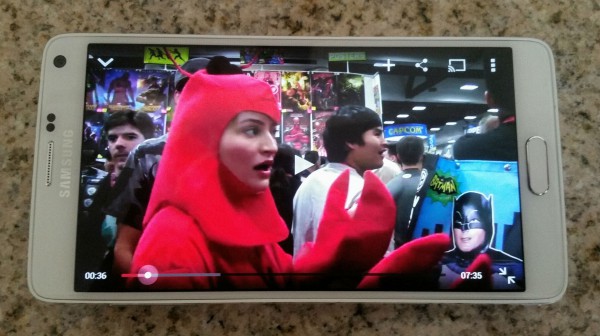 Speaking of pictures, the cameras on the Note 4 are exceptional -- both the front and rear. The 16 megapixel rear shooter takes gorgeous photos, and the optical image stabilization assures photos are not blurry. Videos can be shot in 4K, something Apple's new handsets cannot achieve. Audio quality for the videos is amazing -- check out the 4K video test below.

Selfie-fans will love the front 3.7 megapixel camera, as it takes rather nice photos too. The standout feature for me, however, is that the heart-rate monitor located on the back, doubles as a button for snapping front-facing photos. In other words, you do not need to fiddle with tapping the screen or waiting for timers -- a quick tap triggers the shot. 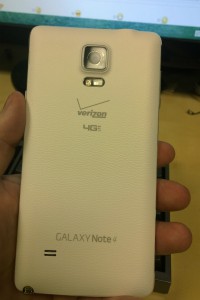 The speaker is passable and produces decent sound quality, but it is small and located on the rear. The upcoming Nexus 6 features dual front-facing speakers for an optimal stereo experience. Would I prefer that the Note 4 have that level of audio design? Sure, but the rear speaker is totally acceptable when listening to music or watching movies. Quite frankly, I usually use headphones for that.

Actually, the Note 4 has something more important than speakers on the face -- a hardware button that doubles as a fingerprint reader. Many Android purists prefer on-screen buttons, but I am not a fan. Sure, it can lend to a cleaner look, but the on-screen buttons do take up screen real estate and can be easy to hit on accident.

The fingerprint reader works very well -- just as good as the Galaxy S5. I know, people hate sliding their fingers, and would prefer a stationary approach like Apple's touch ID. I'm with you there, it would be preferable, but the finger sliding is fine for me, and is close to 90% accurate once you learn the best way to interface with it. Bottom line, sliding your finger is much better than typing a pin or password.

What truly differentiates the Note 4 from most phablets, is the inclusion of the S Pen (aka a stylus). My first smartphone was a Treo 650 and I used a stylus quite a bit, so I was hesitant to embrace Samsung's S Pen, as it seemed like a step backwards. This is definitely not the case, as it unlocks many unique features, which makes Android a more usable operating system. Doing something as simple as selecting multiple photos is a dream, as you can hold down the button on the pen to drag and select. 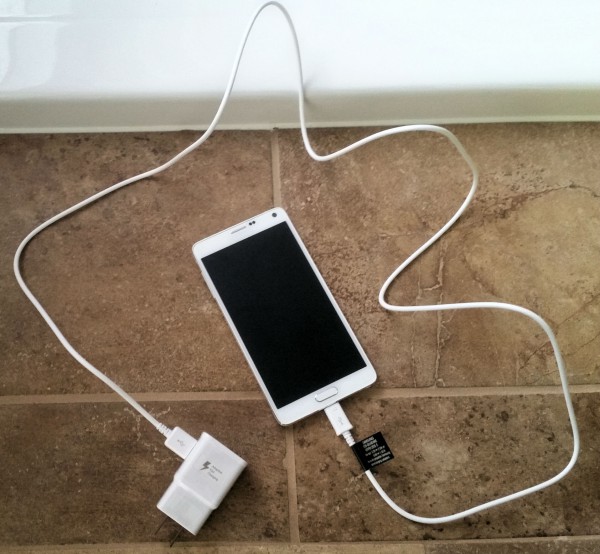 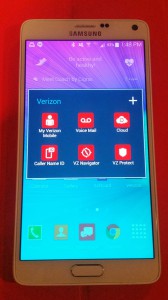 Sadly, the Note 4 ships with Android 4.4.4, but should get a quick upgrade to 5.0 Lollipop. This may be a blessing in disguise however, as 5.0 may have bugs, and is likely to cause issues with existing apps. Android KitKat is a proven and stable base, and should serve well as 5.0 gets straightened out.

The love-it-or-hate-it Touchwiz UI is of course on board, and I love it. Stock Android is fine, but Samsung's enhancements are well executed and improve the overall experience. Little things like folder animations and a more user-friendly settings menu makes all the difference.

I particularly like the pull-down menu that can be customized and expanded to a full-screen view. While it may be overwhelming for some, this too seems better designed than the stock design, and Samsung deserves major kudos.

It's one of those things where, had Google implemented the Touchwiz enhancements, the hardcore Android purists would celebrate them, but because it is Samsung, it is decried. 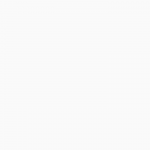 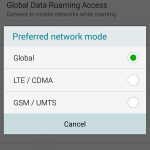 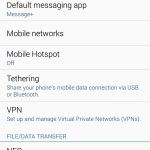 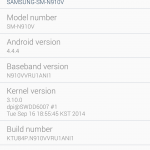 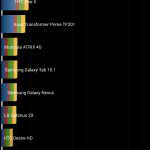 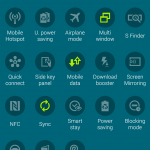 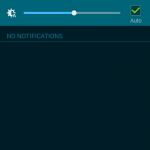 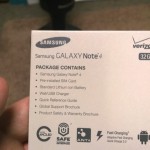 Verizon "bloatware" is kept to a relative minimum, and includes "My Verizon Mobile", "Visual Voice Mail", "Verizon Cloud", "Caller Name ID", "VZ Navigator", "VZ Protect" and the very good "Message+". Do I wish these were all optional? Sure, but it really doesn't slow down the phone. Once root is achieved, you can remove all the apps you want, but remember; missing apps can sometimes cause issues with OTA updates.

Luckily, Verizon has not neutered the phone -- special features are not removed or hidden. For instance, Download Booster is selectable, which enabled simultaneous Wi-Fi and 4G LTE downloads. Also available is Ultra Power Saving mode, which can extend usage when your battery gets low. 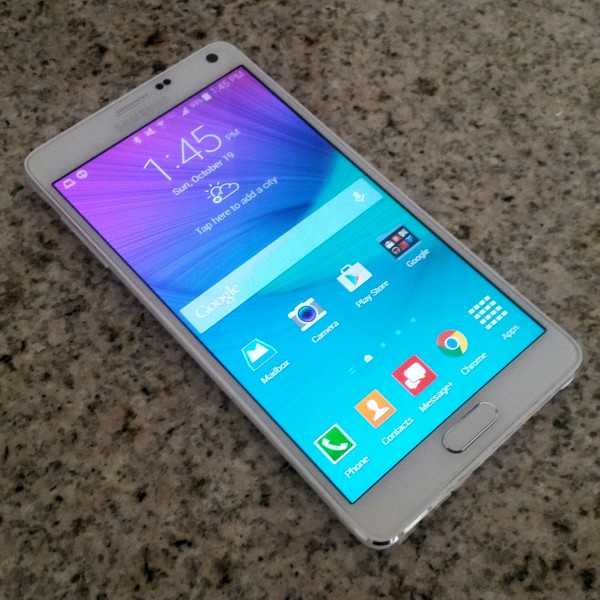 In my limited testing, I can safely declare the Note 4 to be the best Android smartphone on the market today -- powerful, sexy and chock full of features. However, this may be short-lived as the Nexus 6 arrives in November with a bigger screen and similar specs. While I am sure the Nexus 6 will be a great phone, I think Samsung has enough unique features and customizations to make the Note 4 stand-out.

The big question that consumers will ask over the next 6 months will be, "should I buy the Note 4 or Nexus 6?" Quite frankly, you probably can't go wrong either way, but if you like getting work done and put a premium on productivity rather than fast Android updates, the Note 4 is for you. Don't hesitate to buy this phone.