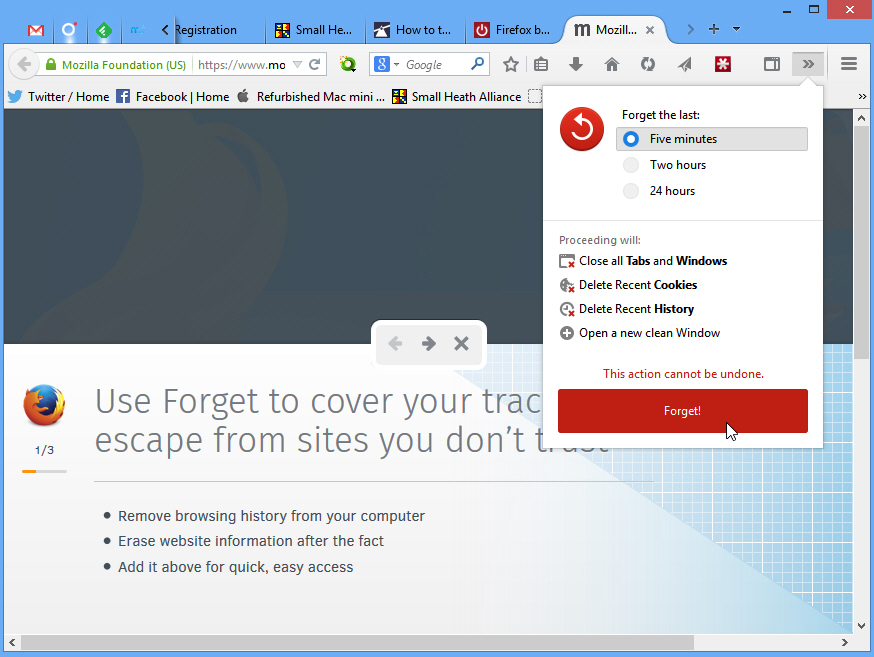 In a surprise move, Mozilla has unveiled Firefox 33.1 FINAL for desktop alongside Firefox for Android 33.1, introducing some major new privacy features in the process.

The update adds a new Forget button for wiping activity over a user-defined period at the click of a button, plus introduces DuckDuckGo searching, which allows users to search without being tracked.

The new features are introduced courtesy of a three-step tour that launches by first prompting the user to add the Forget button to their browser toolbar. Clicking this button gives users the option of forgetting the last five minutes, two hours or 24 hours of activity. Once the time period is selected, users click 'Forget!' and all tabs and windows are closed, recent cookies and history are wiped from the record and the browser opens with a new single window.

Users are then shown the new DuckDuckGo anonymous search feature, which is basically a new search engine option that is added to the user’s existing list. Using this tool allows users to search without their results tracked, boosting privacy as a result. The tour concludes by reiterating Firefox’s existing 'New Private Windows' option.

Firefox 33.1 also introduces a new enhanced New Tab feature, where existing tiles have been "enhanced" based on the user’s browsing history. They replace the site’s default screenshot with what Mozilla describes as a "better" image, which is supplied by the site or partner and includes a logo with rollover image -- one such example is Amazon.com.

The feature also means that new Firefox users won’t be confronted by a set of blank tiles, but instead will be shown content from Mozilla and its partners, clearly marked as "sponsored". Users retain control over the tile, and can remove individual tiles by rolling their mouse over them and clicking the remove button.

The release of Firefox 33.1 has come out of left-field -- it’s the first time Firefox has introduced significant new features in a minor revision since switching to the rapid-release schedule that sees a major new version unveiled every six weeks.