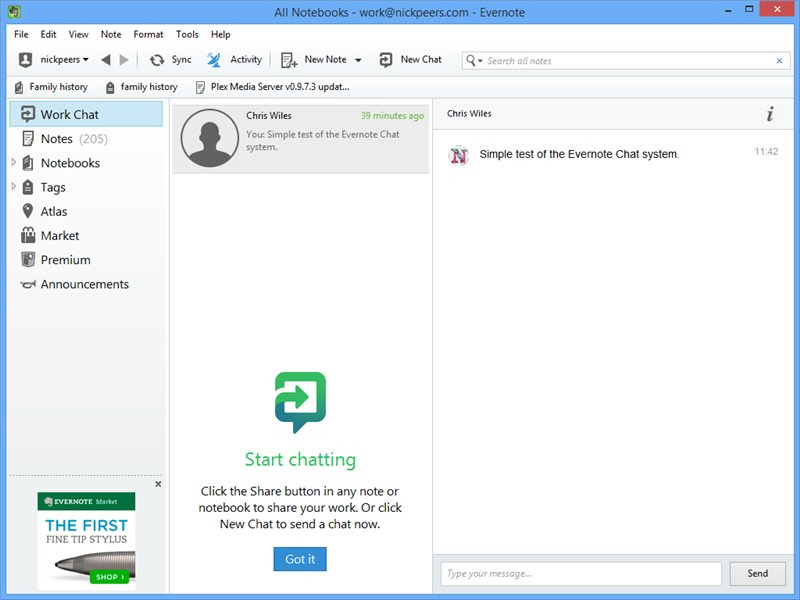 The headline new feature has appeared over the past few days across all platforms. Work Chat is a tool for providing real-time collaborative and sharing features, using the platform’s existing contacts list as a starting point for finding users to work with.

Work Chat now makes it possible to quickly share notes and notebooks within the Evernote for Mac app, and users gain the ability to set view or edit permissions when choosing to share individual notes.

The feature also comes with a built-in chat tool, accessed via the clearly labeled Work Chat button found at the top of the navigation sidebar. This allows users to chat with both individuals and groups about things they’re working on.

When selected, users pick the name of other users and then simply start chatting using a traditional text-based messaging system, similar to Skype. The screen is split into two: on the left are the people taking part in the chat, and on the right is the chat history window.

As part of this new feature, users are now made aware of when other Evernote users are viewing or editing notes in their account, making it easy to start chats. Users can also filter chats to find specific information using the 'Search for people or messages' box at the top of the chat screen.

Evernote for Android users also gain Business Card Scanning, but only if they’re holders of the paid-for Evernote Premium account. This feature scans in business cards, and then automatically turn them into detailed contacts for storing in Evernote, complete with profile photos and the ability to connect via LinkedIn.

Evernote for Mac 6.0.1 also comes with a UI revamp described by Evernote as a "sleek new design inspired by OS X 10.10 Yosemite". It sees the app adopt a flatter, more streamlined look with icons simplified and modeled on the latest iteration of OS X.

The Mac app also also comes with three specific bug fixes: improved handling of long URLs, the restoration of the Rename PDF menu item and a fix for a crash that occurs on launch. The Windows build, meanwhile, gets a number of bug fixes, concentrating on preventing app freezes and crashes as well as sync errors.