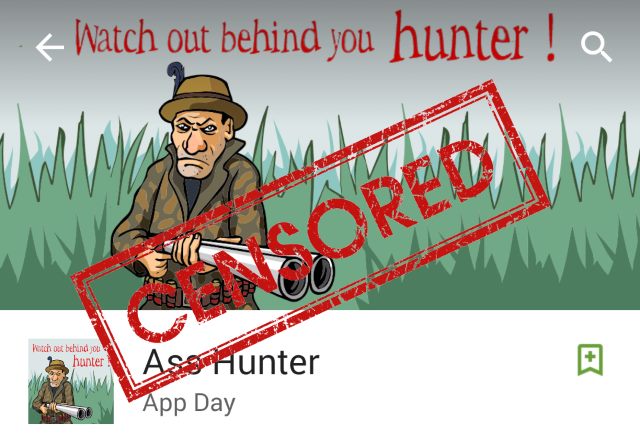 This morning there was flurry of activity on Twitter as people became aware of the existence of a game called Ass Hunter on Google Play (link included for the sake of completion, although it's no longer active). There were snorts of indignation, incredulous shakes of virtual heads, and numerous cries for Google to pull the app without delay.

This has now been done. The game, which described itself as a "popular game on hunting gays", encouraged people to "play and do not be gay" is not new. The Android game is (or was) a port of a title that dates back almost a decade, and its appearance in the Play store highlights an important difference between Google's and Apple's app stores -- the vetting processes involved.

There is one key difference in the way Apple and Google handle apps. Apple pre-vets titles before they hit the App Store. Apps and games have to meet Apple's quite exacting standards before they're allowed through the gates, but it is a very different story with Google. In fact the approach could hardly be more different.

Ass Hunter appeared in the Play Store despite a clause in the Developer Program Policies:

It is not an especially subjective view to suggest that a game in which players are encouraged to hunt and kill gay characters would be covered by the "hate speech" clause. But rather than taking a particularly pro-active stance in weeding out the crap from its store, Google relies heavily on users reporting the titles they deem to be unsuitable in some way.

This is a multi-faceted argument. One way of looking at it is that Google is trying to distance itself from the way Apple operates by not censoring the Play Store. As an advocate of free speech and an opponent of censorship, this is undoubtedly a great thing. At least at face value. But when titles like Ass Hunter appear, things start to get a little more complicated.

The developer, Roman Matrosov, is free to hold and express whatever views he may have. But when these views spill over into the area of incitement to cause harm or commit violence, it's rather a different story. This is why there was such a furore on Twitter:

Dear @GooglePlay, how the hell did you approve a game about killing gay people? #DeleteAssHunter via @tommorris pic.twitter.com/RRHAtZ6Zhs

We reached out to Google for comment about Ass Hunter, but the company was unwilling to shed much light on what had happened. The company said it has a policy of not commenting about individual apps, but went on to say that Ass Hunter had since been pulled from the Play Store. Had the game been submitted to Apple's App Store, the manual checks that are in place would have meant that it would be caught and blocked. Does this amount to responsible publishing, or interfering censorship?

It's great that Google saw fit to remove the game, but the response on Twitter -- the disbelief that such a title would be available in the store -- goes to show that it should not have been there in the first place. This runs counter to my usual anti-censorship stance, but here we’re talking about promoting and encouraging illegal activity (albeit within the confines of a cartoony game) and reinforcing misplaced prejudices.

Which approach do you think works best? Pre-vetting or waiting for issues to be reported?