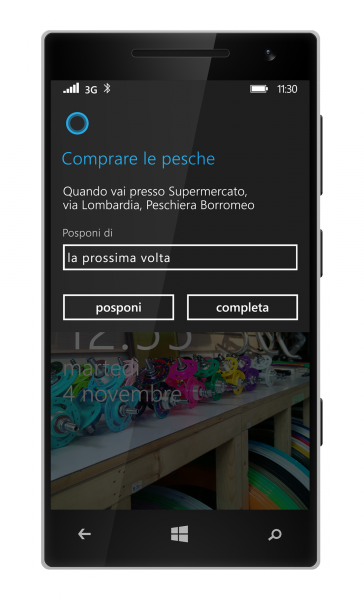 Since its beta introduction to the US in the spring of this year Windows Phone 8.1's personal assistant tool Cortana has generated lots of interest.

It became available in the UK and China over the summer but now it's moving into the rest of Europe with native language versions for France, Germany, Italy and Spain.

From today Cortana will be availabe in these countries as an alpha via the Windows Phone Developer Preview Program. This will have most of the features of the beta but some are still missing.

Flight tracking isn't available for alpha for example and transit data is currently limited to larger cities. Also reference data isn’t available, though Microsoft says it's working hard to enable this soon. Cortana's 'personality' will be tailored to each market with local chat and jokes to make it culturally relevant. It will also show European football league data.

Marcus Ash, program manager for Cortana, writing on the Microsoft blog encourages the developer community to use Cortana, "By working with her, you will help to improve her conversational understanding and also help us improve her intelligence -- the breadth of answers she can provide and the categories she's aware of -- so she can truly help you throughout your day. There's no need to file explicit feedback: simply using Cortana will help make her better over time. It's so exciting to see the passion the community has had for Cortana and your passion has been one of the driving forces for us to bring Cortana alpha to more countries".

In order to try the new alpha you'll need to sign up to the Developer Preview Program.