United Airlines to equip more than 23,000 flight attendants with iPhone 6 Plus 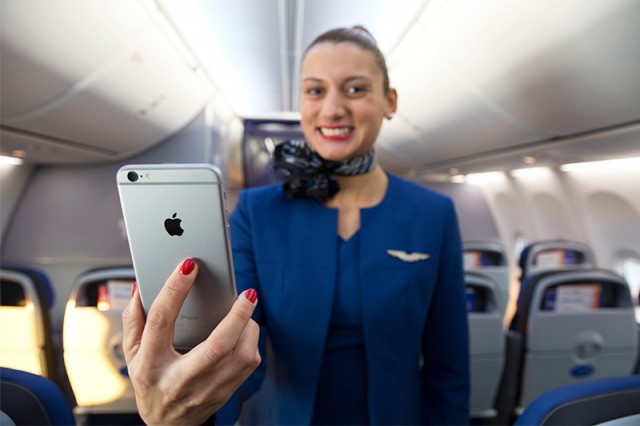 Whenever I read about a company deploying a certain number of smartphones for internal use, it is usually Windows Phones which are given to employees. And Microsoft is the company that proudly does the official announcement on behalf of (or together with) its customer. This time around things are (very) different.

US airline United Airlines has announced that it will deploy iPhone 6 Plus to over 23,000 flight attendants, with the initial goal of giving them the ability to access company resources -- like email, Intranet, policies, and procedures manuals -- and also to handle retail transactions during flights.

United Airlines has said that it plans to expand the role of those iPhone 6 Plus units in the future, following deployment, to also replace the flight attendants' printed safety manual, as well as provide information on cabin issues and repairs. The airline's customers will also apparently be able to take advantage of some tailored tools, which United Airlines plans to develop.

"We are thrilled to make this investment in our flight attendants", says United Airlines senior vice president of inflight services Sam Risoli. "iPhone 6 Plus will enable them to deliver an even higher level of flyer-friendly service and will offer our flight attendants simple, one-touch access to valuable work information, enabling them to better serve our customers".

Choosing to give flight attendants iPhone 6 Plus instead of iPhone 6 seems like a strange decision, to be honest. The phablet is quite unwieldy after all, and this may make some users uncomfortable for a while. But, it has a much longer battery life, which is likely paramount during long flights.