Pandora brings your music to Xbox One 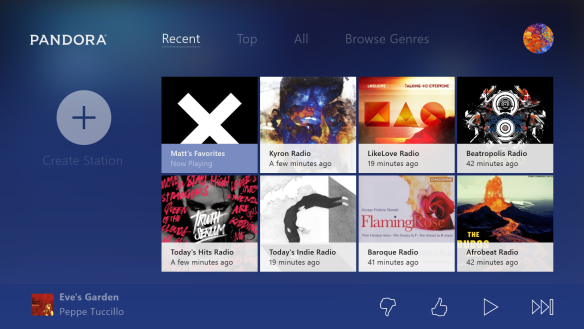 Pandora is one of the grandfathers of streaming music services, and remains among the most affordable and well known sources around. It's available on phones and even set-top boxes, not to mention, right on your computer. There are also apps for smart TVs and Blu-ray players. In other words, it is almost ubiquitous.

Now the music service is launching on your Xbox One. The new app was built specifically with the gaming console in mind, with an interface designed to look good on your TV. It will not only be pretty, but provide music while you play your game, and even adds a couple of new features.

"Our Xbox One listeners will have more ways to get to their favorite music as quickly as possible as Pandora for Xbox One provide users with two new views, one of which displays recently listened to stations and the other which displays cumulative time spent on specific stations", states Ian Geller, vice president of of business development at Pandora.

Beyond these features Pandora promises a new mini player, allowing you quick access to your tunes. In addition, Kinect gestures provide easy access for customers.

Pandora calls the gaming console "immensely important". That's something Microsoft will, no doubt, be happy to hear. It also claims that 76 percent of male gamers in the 13 to 34 age range listen to music while playing, and Pandora is the prime choice for that. Now it has become much easier to accomplish such a feat if you so choose.