We've already heard that 2015 is supposed to be the year of cryptocurrency, and Microsoft recently announced that Bitcoin is an acceptable form of payment. Now Reddit is getting in on the virtual currency action. Kind of. Well, perhaps. The details are vague at the moment, but the intriguingly-named Reddit Notes have been announced.

It comes just a few months after Reddit managed to secure $50 million in funding, and at the time "the investors in this round have proposed to give 10% of their shares back to the community". The birth of Reddit Notes is the start of this payback, but it's not yet clear who will receive them or what they will be used for.

The name has the distinct feel of a cryptocurrency, and Reddit explains that there are "approximately 950,000 reddit notes to divide among active user accounts". The notes can be viewed like shares at this stage, and it's obvious that there will have to be some sort of selection process if less than 1 million shares are to be distributed between users: there are just too many users for everyone to be included.

There aren't as many reddit notes as there are accounts, so if you get one, lucky you! Eligible recipients of reddit notes will be determined based on activities before 9/30/14, and we plan to give them away in the fall of 2015. We're still working out details on both the technological and legal aspects of the project, especially regarding how reddit notes will work within existing government regulations.

Reddit Notes are surrounded in ambiguity at the moment -- well, you have to get the hype machine going somehow -- but a basic infographic shows that Reddit Notes can be donated, given, traded, used as payment, or saved. There's no hint about when we might know more, but Fall 2015 is a way off yet, so there's plenty of time for more details to come out. 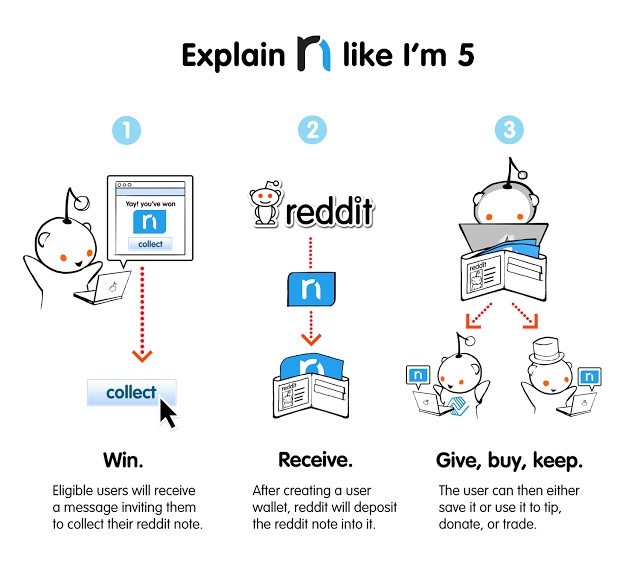