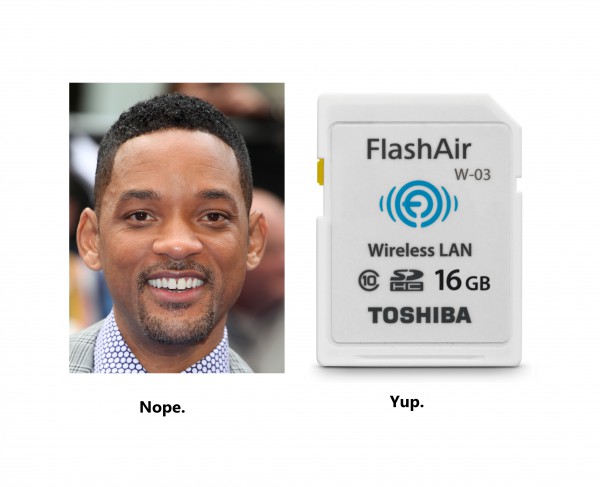 Will Smith is a pretty cool guy. Back in the day -- when I was a kid -- I was a big fan of his rapping with DJ Jazzy Jeff. What really made me a fan of his, however, was the classic TV show, The Fresh Prince of Bel-Air. On the program, Will played a nice young man from a poor neighborhood, who moves to a wealthy neighborhood to avoid a life of crime. It is a very funny show, that is forever cemented in popular culture.

Unfortunately, as cool as Mr. Smith is, I cannot store my digital photos inside of him. Hell, even if the actor contained flash memory, I highly doubt he would also have an integrated wireless LAN access point. Well, move over Mr. Bel-Air; its time for the FlashAir, as in the Toshiba FlashAir III. Yes, this is an SD Card with built-in Wi-Fi. True, it is not really a new concept, but Toshiba's implementation seems elegant.

"The FlashAir III delivers speedy data transfers so users can quickly upload their images and videos. The FlashAir III Wireless SD Card's Internet pass-through feature allows users to access the card and Internet (via your separate wireless router) simultaneously, enabling the ability to upload images in real-time. Using a wireless LAN chip, The FlashAir III Wireless SD Card is accessible to any wireless capable computer, smartphone, or tablet, and can support simultaneous access from up to seven devices. In addition, the built-in Wi-Fi access point also allows for transfers without an Internet connection", says Toshiba.

The company further explains, "the Toshiba FlashAir III Wireless SD Card will be available for purchase in March, 2015 at various retailers, and on toshiba.com/us for $79.99 MSRP for 16GB and $99.99 for 32GB".

Will you buy this snazzy SD card? Tell me in the comments.