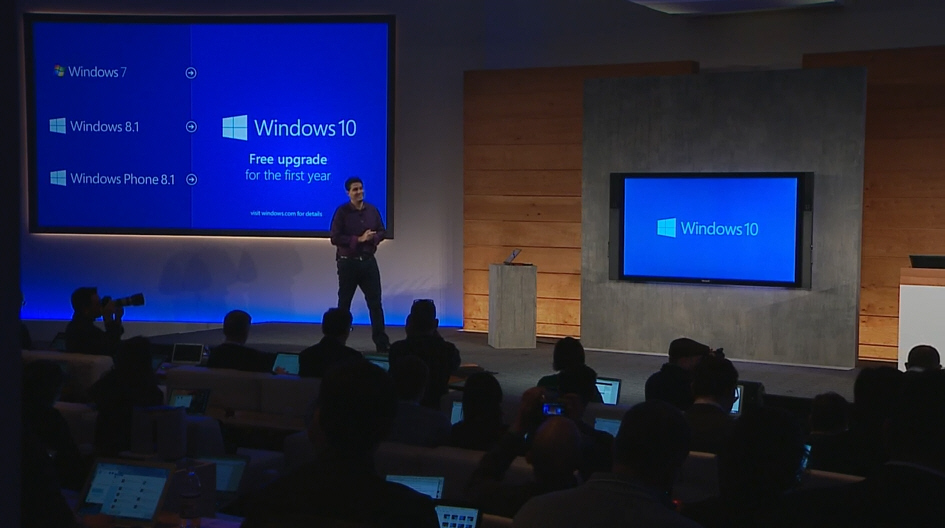 So the Windows 10 briefing is well underway, and Microsoft has already dropped a bombshell, although it’s one that many people will have been expecting.

If you have Windows 7, Windows 8.1 or Windows Phone 8.1 you will be able to upgrade to Windows 10 for free. That’s right, it won’t cost you a single penny. And who doesn’t love free? Now the bad news… it's only free if you upgrade in the first year.

Microsoft says it now views Windows as a service, so there's the possibility it will be looking to bill people for a yearly subscription as it does with Office 365. Microsoft hasn’t gone into the exact details yet. Or cost. Just shouted "Free!" and moved on. It's possible it will be entirely free for anyone upgrading in the first year and remain that way. Either way, I've asked Microsoft for clarification.

"Today really is a monumental day for Windows," Terry Myerson, Microsoft's Executive Vice President of Operating Systems, announces. "Windows as a Service is great for consumers, it's great for developers and it’s great for the security of our enterprise customers. Windows 10 is so much more than the latest version of Windows. Windows 10 changes the rules of game and redefines the relationship between us and our customers". You can say that again.

Making Windows free in this way will definitely help launch Windows 10 with a bang, and avoid the embarrassingly low market share experienced by its predecessor. Removing the price -- for upgraders in the first year -- will also remove the barrier to entry, allowing anyone to try the OS. Smart move Microsoft, smart move. Now we just need to know what’s going to happen price-wise after the first year…

We announced that a free upgrade for Windows 10 will be made available to customers running Windows 7, Windows 8.1, and Windows Phone 8.1 who upgrade in the first year after launch.

This is more than a one-time upgrade: once a Windows device is upgraded to Windows 10, we will continue to keep it current for the supported lifetime of the device -- at no additional charge. With Windows 10, the experience will evolve and get even better over time. We’ll deliver new features when they’re ready, not waiting for the next major release. We think of Windows as a Service -- in fact, one could reasonably think of Windows in the next couple of years as one of the largest Internet services on the planet.

During the question and answer session that followed the briefing Satya Nadella admitted that they haven’t worked out Windows 10 pricing details yet.

Update 2. And for good measure, a Microsoft spokesman tells me:

We will offer a free upgrade to Windows 10 for qualified new or existing Windows 7, Windows 8.1 and Windows Phone 8.1 devices that upgrade in the first year! And even better: once a qualified Windows device is upgraded to Windows 10, we will continue to keep it up to date for the supported lifetime of the device, keeping it more secure, and introducing new features and functionality over time -- for no additional charge.

Update 3. And finally, if you're wondering what Microsoft means by "qualified":

It is our intent that most of these devices will qualify, but some hardware/software requirements apply and feature availability may vary by device. We will be sharing more information on the requirements and additional offer terms in the coming months.