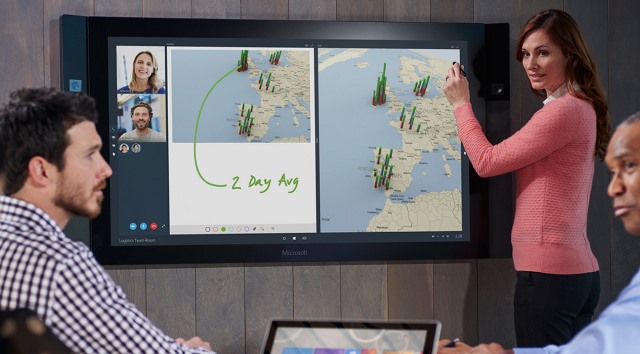 Surface got off to something of a stuttering start, but Microsoft's sort-of-tablet/sort-of-laptop has gained quite a following as it hit the third generation. With the launch of Windows 10 on the cards, the company is now thinking about not just software, but also new hardware formats. We've seen HoloLens, but the device that could transform both work and education is the Surface Hub.

Announced as an 84-inch Surface, it would be easy to dismiss this as a headline-grabbing gimmick, but it's more than that. Much more than that. It's a tool for the office, a tool for enterprise, and a tool for schools and colleges. This is Microsoft showing how Windows 10 can be used for collaborative work, bringing the interactive whiteboard kicking and screaming into the 21st century.

This is Microsoft's game-changing 84-inch Surface powered by Windows 10, and the size is the first indication that this is designed to be used by several people at once. In the conference room, classroom, or boardroom, rather than gathering, hunched around a single tiny laptop, or awkwardly and unreliably sharing a desktop session between several screen, one massive, interactive screen lets everyone not only see what's going on, but also to get involved.

The message that Microsoft is pushing is the idea that working in a group not only helps to boost productivity, but also helps to generate more ideas. This is your new creative hub, and it's a perfect demonstration of how Microsoft is now using joined-up thinking. This is not a case of bolting together a series of independent tools and hoping they work together, rather it is the result of collaboration between the Windows team, the Surface team, the Skype team and the Office team.

And collaboration is very much the name of the game. The large screen -- and it is a LARGE screen -- is perfect for giving presentations, but it comes into its own as an interactive group tool. There's a OneNote-based whiteboard tool that everyone can interact with using their own stylus; this is electronic brainstorming and so much more.

Need to pull in other people who can't get to the office? This is where Skype comes in. Just start a Skype video call and everyone can take part. This is just the beginning. Microsoft is opening up the platform to third party developers who will be able to create all manner of new peripherals and apps:

Microsoft productivity apps like Office and Skype for Business are built in. And with native support for touch, ink and sensors, the hardware will also enable third party developers to develop beautiful, powerful, immersive applications that light up on the big screen and enable groups to be productive together.

The video below shows the Surface Hub in action:

In terms of hardware and specs, the Surface Hub doesn’t disappoint. The display is 4K, and the screen and touch sensor are rated at 120Hz. Microsoft explains that by boosting the touchscreen's framerate twofold, lag and latency are completely eliminated. Xbox Kinect technology is used in conjunction with a pair of full 1080p cameras and a mic array to track people in the room. The Surface Hub will be powered by a choice of fourth generation Intel i5 and i7 processors, and it can be either wall-mounted or moved from room to room on wheeled stands.

There's no word on pricing or release date yet, but it should tie in neatly with the general launch of Windows 10 later in the year. The office and classroom are about to get a whole lot more exciting.