Windows 10 Technical Preview Build 9926 is much better, but there are known problems 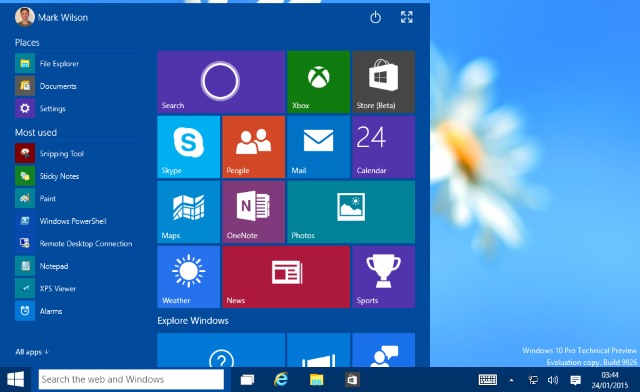 Yesterday, Microsoft took a lot of people by surprise by releasing Windows 10 Technical Preview build 9926 rather earlier than expected. Here at BetaNews we've installed the latest build on various machines -- virtual and real -- having battled with downloads, and now it's time for testing.

We'll be taking a look at this latest build in more depth in future articles, but before we do, it is probably worth pointing out some of the known problems. From playing with build 9926 just briefly it's easy to see that it's a marked improvement on previous releases, but Microsoft has helpfully forewarned users of issues they might encounter.

Of course, we must remember that this is only a preview; problems are very much to be expected and they'll almost certainly be ironed out in the final release. That said, things get off to something of an irritating start for some people who will find that rather than booting straight in to Windows 10, they are instead present with a boot screen. Microsoft explains that this is because of a "bug where a second boot option is persisted to uninstall the Windows 10 Technical Preview and roll back to the previous OS installed". It's just a matter of manually selecting the correct boot option each time, or waiting for 30 seconds for the default option to be selected.

The revamped Start menu has a few potential issues. You may find that the menu fails to launch from time to time, and icon labels can be truncated. One of the most eagerly anticipated features, Cortana, has quite a few problems at the moment. Microsoft points out that complex reminders may not be correctly created, and it is not currently possible to edit reminders. It's worth creating a test reminder as there's a possibility that the first one you create won't be displayed, and completed reminders do not currently move to the History section.

Gamers may experience problems with Xbox Live-enabled games, but Microsoft promises that a fix is in the pipeline. Other issues include the appearance of a battery icon on the lock screen of devices that do not have batteries, pixilation in Remote Desktop sessions, a disappearing Music app, and shorter-than-normal battery life on devices with Connected Standby.

As this is pre-release software, there will undoubtedly be more problems than this, but it's good to know what you're dealing with right from the start. We're still testing out this Build 9926, and you can expect more coverage as we try it out. In the meantime, have you noticed a marked improvement from previous builds?

84 Responses to Windows 10 Technical Preview Build 9926 is much better, but there are known problems