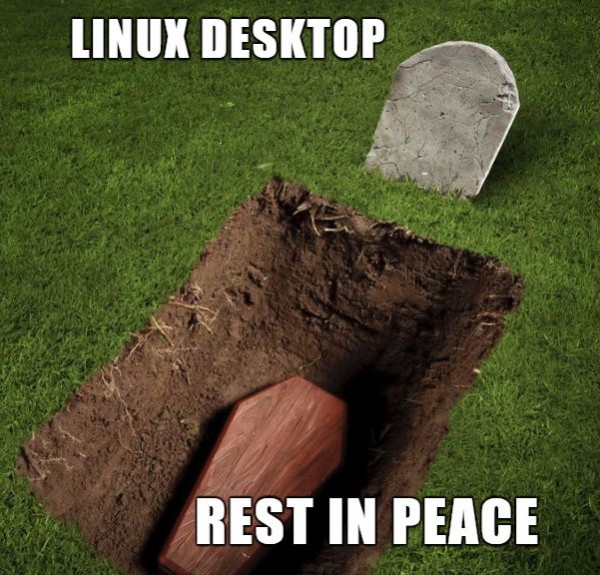 For years now, we Linux fans -- yes, myself included -- have been dreaming of the fabled "Year of the Linux Desktop". What does that mean? To have Linux-based operating systems snag a bigger piece of the desktop pie, if not a majority. While a majority share of the desktop is admittedly absurd, a respectable share was always something I considered a possibility.

For some, this desire stems from a hatred of Microsoft and Windows; that is not my stance, however. No, I love both Linux-based operating systems and Windows; I just want Linux distros to get a bit more respect. A lot of work goes into Ubuntu, Fedora and others and it is sad that they are not used by more people. While the consumer hatred of Windows 8 seemed like an opportunity for Linux to grow, sadly, it did not happen. Even sadder? Windows 10 closes the door entirely. The year of the Linux desktop will never happen. Rest in peace.

So does this mean Linux on the desktop is entirely dead? Hell no! Only the hope of it gaining any meaningful market share. Fedora, Mint, Ubuntu and others will continue to see success, albeit on a very small scale. Windows 10, however, will solidify Microsoft's grasp of the desktop market.

True, Windows 10 is not yet officially released, but even the preview releases show that Microsoft is listening to its customers and addressing the Windows 8 complaints. Basically, Microsoft is giving the people what they want, while improving it beyond their imaginations.

I blame the Linux community for not capitalizing on Windows 8's failure in the court of public opinion. In other words, the enemy was at its weakest point, and the community did nothing. Sadly, the failure to act can be blamed on the fragmentation of the community; too many distros and a lack of leadership.

But wait, Linux distros are free; surely people will want to jump at that price, right? Unfortunately, giving it away has done it no favors over the years, and Windows 10 will be a free upgrade for all users on Windows 7 or above for the first year. When Linux-based operating systems and Windows are both at parity from a price perspective, Microsoft's solution is the better value.

From a market share perspective, Linux owns the mobile space with Android; this is an undeniable fact. However, on the desktop, it will never be anything more than a niche hobby. You know what? That's OK. If you love using a Linux distro, more power to you. However, it is time to accept that you are forever on the fringe -- you can thank Windows 10 for your shattered dreams.

Yes, the final version of Windows 10 could be that good.

[UPDATE] Linux is now being haunted by a GHOST. Read more here.