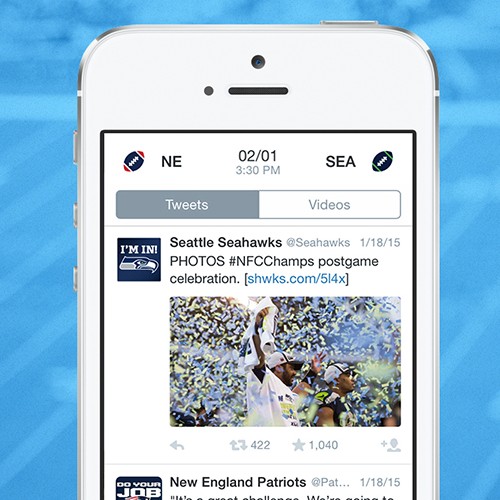 Hey bro, it's almost Super Bowl Sunday! You know what that means, right? Testosterone and fatty foods. For one day a year, weak computer nerds like me pretend to be men by watching NFL football and eating junk food. Truth be told, I enjoy watching American football, but for the most part, I am happier watching Big Bang Theory or The Bachelor with a nice cup of herbal tea!

Don't worry, if you are a computer nerd that isn't interested in watching sports, you can at least use technology to enhance the Super Bowl experience. How? With Twitter, of course! Yes, between watching the commercials, you can pull out your iPad or Nexus 9 and follow the action with the hashtag #SB49. This will enable you to at least look like you know what you are talking about when the other guys are discussing the game.

"Our Super Bowl #SB49 timeline makes it easy to get in the game. With it you can see Super Bowl-related Tweets from players, teams, media members, celebrities, fans and people in your network, plus the live score on game day. To see this timeline, search for or tap on #SB49, #SuperBowl or #NFL within Twitter. The timeline is available now on the Twitter app for iPhone and Android and twitter.com (to get it, make sure you have the latest version of the Twitter app)", says Twitter.

In advance of the game, you should probably learn who the most popular players are. Below are the top 5 most tweeted-about players from each team. Only Tom Brady, the best known player of them all, does not have a Twittter account. I can't say that this is surprising, as he probably would receive many nasty tweets regarding the deflated football scandal. Even if you aren't a sports fan, it has been impossible to escape the "DeflateGate" controversy in the mainstream news.

Yes, I realize not all computer nerds are adverse to sports; if you are into both things, more power to you and I apologize for my generalization. With that said, it can be a very painful and emasculating feeling, when you don't fit the image of the typical man that society and the media portray. Believe me, you can still be a "real man" while not enjoying football, UFC fighting and other barbaric things. However, from a shared experience perspective, I urge you to watch the Super Bowl. If you get bored, just jump on Twitter; that's what I will do.

Who do you want to win? Tell me in the comments below.