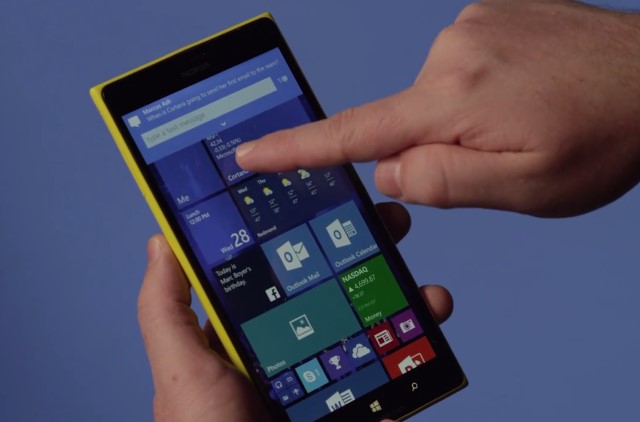 The chances are that you have tried out Windows 10 on your computer already and now -- at long last -- you have the opportunity to try it out on your Windows Phone. Windows Insiders can now grab the first public build of Microsoft's latest mobile operating system and try it out for themselves.

Windows Insiders have been eager to see what Microsoft has done with Windows Phone, and earlier today Gabe Aul cryptically hinted at when the first build would be released. Now it has gone live. As with all preview builds, this is far from a completed product, and there are a few caveats to bear in mind.

First of all, there are a very small number of handsets that are eligible to use the preview for now. In fact, there are just six: the Lumia 630, Lumia 638, Lumia 635, Lumia 730, Lumia 636 and Lumia 830 -- but, pleasingly, the preview is available internationally. There's no mention of some of the big hitters like the Lumia 928, 929 and 930 at this stage. If you're wondering why more high-end phones are not included, Microsoft has an explanation:

We have a feature that will be coming soon called 'partition stitching' which will allow us to adjust the OS partition dynamically to create room for the install process to be able to update the OS in-place. Until this comes in, we needed devices which were configured by mobile operators with sufficiently sized OS partitions to allow the in-place upgrade, and many of the bigger phones have very tight OS partitions.

The second thing to keep in mind is that -- as the company points out -- this is the earliest ever public preview for Windows phones. Just as with Windows 10 on the desktop, Microsoft is looking for feedback but warns Windows Insiders that:

You will encounter bugs. You will see experiences that are clearly just not done yet, and UX that lacks polish at this point. DON’T WORRY! It will improve as we go and new features, stability and performance improvements, and more polished UX will come at each step.

So what's new? In addition to a (somewhat) seamless experience when moving from the desktop to a phone handset, and the ability to work with universal apps on both platforms, Windows 10 Technical Preview for phones boasts:

There's a lot missing at this stage, and there's clearly a lot of work still to do, but this is the preview that people have been asking for. There are a lot of known issues, but they're being worked on, and new builds will follow in the coming weeks and months.

Introducing this first build in a blog post, Aul explains how to get hold of Windows 10 Technical Preview for phones:

So... fire up your Windows Phone and head on over to the Windows Insider website. Joe Belfiore shows off some of what you have to look forward to in a specially-produced video: