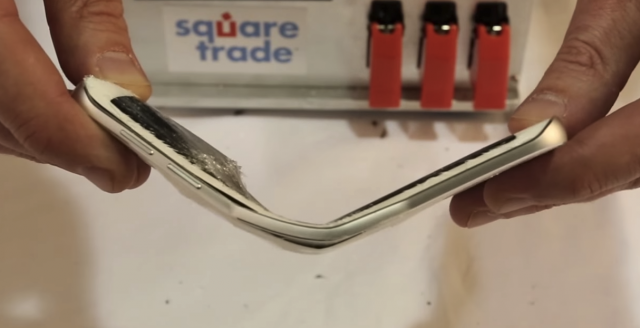 Every new high-profile smartphone is subjected to a bend test nowadays. It's become a tradition following the launch of iPhone 6 Plus, which has been found to easily bend under pressure. So, naturally, when it came time to test Samsung's new Galaxy S6 edge and HTC's new One M9, SquareTrade chose Apple's phablet to serve as the basis for comparison.

Galaxy S6 edge appears to be more fragile compared to Galaxy S6, due to the rounded screen which minimizes the level of protection offered by the surrounding metal frame. Meanwhile, HTC's One M9 has a more traditional form factor, similar to last year's One (M8), which should help it fare better. So how easily do they bend?

The SquareTrade test reveals that Galaxy S6 edge bends as easily as iPhone 6 Plus. Both smartphones cave at 110 lbs of pressure. Both were outdone by One M9, which lasted until 120 lbs of pressure -- at that point, however, HTC's flagship was rendered unusable, as the power button was no longer actionable.

Apple's phablet came out on top overall, with the point of "catastrophic failure" at 179 lbs of pressure, whereas Galaxy S6 edge managed to last up to only 149 lbs of pressure. SquareTrade points out that this could be worse than the original bend-gate, as Samsung's flagship will see its screen shattered in lots of little pieces in the owners' pockets in such extreme conditions.

While I have yet to get my hands on either Galaxy S6 edge or One M9, I have been using an iPhone 6 Plus as my daily driver for a good couple of months without having it bend. Due to its size, I can't keep it in my pants' pockets comfortably, and I suspect a lot of users will have the same problem. It fits better in a coat or jacket's inside pockets, and there it's not going to be subjected to any serious pressure in normal conditions.

Galaxy S6 edge and One M9 may be used differently, but even so it's going to be tough to bend them unless users are (inadvertently) trying to find where the limits are. Carried in the pockets of skinny jeans or tight clothing increases the risks, so take this into account. Or just get insurance, as you never know when you might need it.