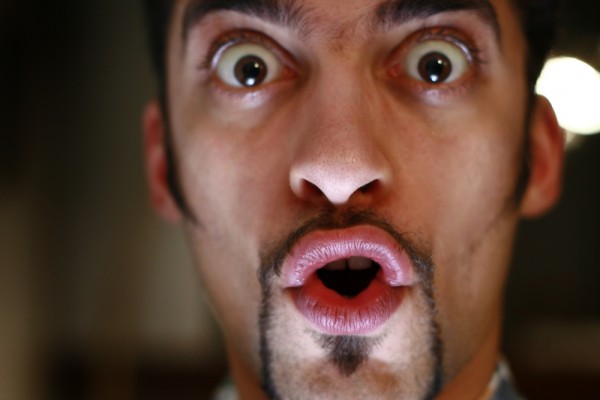 As the clock passes Midnight and takes us into April 10, Apple Watch preorders begin. Sales start two weeks later. The buzz is big, but will actual demand be? Argus Insights, an analyst firm that is new to me, doesn't see strong sales ahead. The metrics are interesting: 7.8 million social interactions and 65K online reviews about wearables.

"Though the Apple Watch will of course be successful, we don’t see the product to be wildly successful", John Feland, Argus founder, says in a statement. I reviewed the firm's report, which data is from September 2014 to end of March 2015, and it's interesting reading. The question, and Apple Watch sales likely will answer: Is online social buzz a means for predicting a product's success?

Argus sees a rocky road ahead for Apple Watch. Among the reasons:

Three other related findings fit with what I've said for months: Apple Watch will be the fruit-logo company's most successful failure ever. Meaning: The device will sell, at least initially, but not be a grand hit. What Argus sees stalling demand, beyond competition among wearables:

Argus sees measured success ahead for Apple Watch, which I will add cannot be good for Tim Cook. The timepiece is the first big new product launch under the CEO's stewardship, and he leads a company about which perception is a key factor driving sales and, more importantly, shareholder interest.

But Slice, a shopping analytics firm that also is new to me, offers contradictory perspective -- and, oddly, from similar analogy. Both companies refer to the iPod in their analyses. Where Argus sees Apple ecosystem dependence tying down the smartwatch, Slice likens the wearable category to the MP3 player market before iPod's launch in October 2001.

Where one analysis looks at the "iPod moment" beginning April 10, the other doesn't see Apple repeating history with smartwatches the way it did with MP3 players. 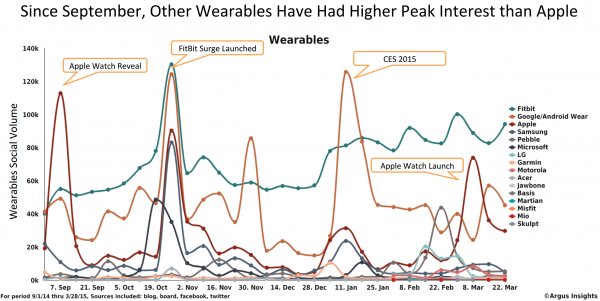 I will circle back with Argus asking for real-time social buzz measurements, which may or may not be available. I will ask because the first round of Apple Watch reviews posted overnight April 9, and they weren't glowing. The Verge's review is among the best-presented and most damning. Reporter Nilay Patel spent about a week-and-a-half with the smartwatch, and slow performance is a theme tying together the narrative. For example:

There’s virtually nothing I can’t do faster or better with access to a laptop or a phone except perhaps check the time. It’s not just the small screen or the quick in-and-out interaction design, it’s actual slowness…

It’s disappointing to see the Watch struggle with performance. What good is a watch that makes you wait? Rendering notifications can slow everything down to a crawl. Buttons can take a couple taps to register. It feels like the Apple Watch has been deliberately pulled back in order to guarantee a full day of battery life. Improving performance is Apple’s biggest challenge with the Watch.

I see reviews like that as a buzz killer. 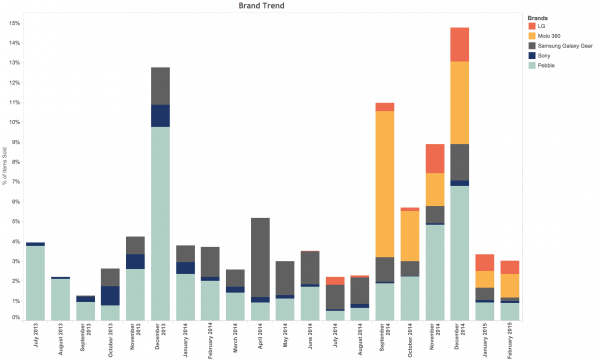 Clarification: BetaNews did not receive a review unit, and obviously we couldn't buy Apple Watch before larger tech sites posted their takes. So we cannot speak firsthand about the device or any of its shortcomings. That said, the larger issue is one of online and social media buzz, which Argus claims is measurable predictor of eventual demand. And as I repeatedly say: In business, perception is everything.

If Apple Watch fails the early perception test, demand could stagger more than Argus suggests. Before the reviews posted, Slice observed Apple users waiting for the smartwatch. Data point: Through the end of February, 1.5 percent of existing fruit-logo product users bought a smartwatch compared to 4.5 percent of Samsung device owners. The questions: Will many choose an iOS-compatible rival and will potential iPhone converts choose something else? All based on buzz from first reviews?

Follow-up reporting with Argus and actual Apple Watch first-weekend preorders will help answer those questions for the future.