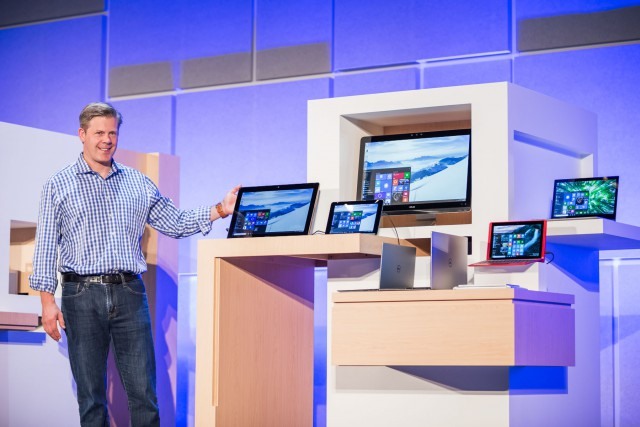 Windows 10 is now less than two months away, and today at Computex 2015 Microsoft unveiled the latest range of devices designed with the operating system in mind. Taking to the stage in Taipai, Microsoft's Nick Parker revealed a collection of desktops, laptops, and tablets that will run Windows 10.

The latest version of Microsoft's operating system aims to be all things to all people, and this is something that is reflected in the diversity of devices on show today. In addition to traditional PCs, the 2-in-1 convertible range continues to grow, and there are tablets from a number of Microsoft partners. There's hardware from lots of familiar names, but also from lesser-known companies.

Among the big names is the ASUS Transformer Book T100HA, a laptop with a detachable keyboard, and the gamer-centric, quad-core Intel Core i7-powered ASUS Zen AiO Z240. One of the newest devices is the Dell XPS 15 which features the "virtually borderless" InfinityEdge display that proved so successful in the smaller XPS 13. There's an interesting 2-in-1 from HP that features a detachable, magnetic, hinged keyboard that allows the devices to switch easily between tablet and traditional laptop mode.

Windows Hello is something that Microsoft is keen to show off, and this biometric security feature is supported by a new Toshiba system. The Toshiba Astrea features a face identification and authentication camera that can be used as a means of logging in to your account. Other devices of note include the FoxConn Kangaro. This ultra-portable desktop PC turns a TV into a full Windows PC, and includes a fingerprint reader and offers up to six hours of battery life.

This is just the start of a surge of Windows 10 devices that is sure to explode in the coming weeks and months. Rumors abound about the imminent announcement of a Surface 4 Pro, but Microsoft remains tight-lipped about this for the moment.