An SSD should be the first upgrade for your PC 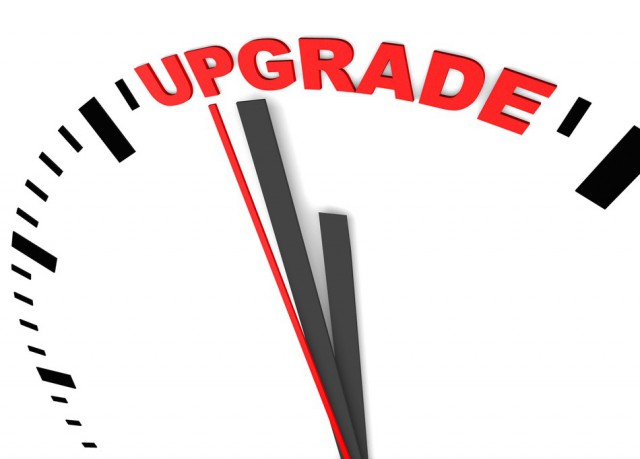 If you are not happy with how your desktop PC or laptop performs, chances are it has a plain-old HDD inside. It is likely large enough to store all your files, but the old technology it is based on makes it extremely slow by modern standards -- apps and programs take a long time to load and transfer speeds are low. Basically, it is the reason why your device does not feel as fast as a new, high-end PC. Fortunately, you can give it a new lease on life.

The first upgrade that you should consider is an SSD. It is a huge improvement over virtually any HDD, as it will greatly improve load times and transfer speeds, making your device feel much more responsive, and reduce noise and power consumption. To show just big a difference it can make, I have tested an Emtec SSD Power Plus drive, in 120 GB trim, with an old HP Compaq 610 laptop.

What you need to know about this Emtec drive is that it is a budget offering. Sequential read speeds are rated at 550 MB/s, which is good, but writes are only rated at 160 MB/s, which is not as impressive. This is clearly not the fastest drive around if you write lots of data, and this is also reflected in the cost. The 120 GB version can be had for just under $75 off Amazon. There are cheaper options available, however.

The Compaq 610 that I'm using should serve as a good indicator of how much an SSD can improve performance and usability. It was not the fastest laptop around when it came out on the market, so any difference is easily noticeable today. Chances are, your device is faster than it.

The fact that there's "Compaq" in its name should tell a lot, but the gist of it is that there is only a single core Intel Celeron 570 processor inside. It also has 3 GB of RAM; this is where I have made an upgrade, many eons ago, by installing a spare 2 GB module that I had lying around. Even with it installed, the difference in real-life performance is negligible. Again, your device likely comes with more than 2 GB of RAM installed, so this shouldn't be a concern. The tests were conducted on Windows 8.1; the 64-bit version was used with the SSD while the HDD had the 32-bit version on it.

With the HDD installed, I don't consider this laptop to be usable even for simple tasks. Opening Google Chrome, for instance, takes a very long time, tens of seconds if it remembers the previously loaded tabs. The performance varies, so it is hard to come up with a consistent figure.

The laptop is even slower when we involve a couple of YouTube videos. At some point, the browser will become unresponsive and it will take a while before it recovers. Opening more programs will slow things down even further. Coming from a 2013 Apple MacBook Air, it really feels unusable.

Given that the HDD inside also happens to be quite old -- it does not help that it spins at just 5400 RPM either -- if you want to transfer files from one partition to another, or copy something from a network drive, you have to leave everything else aside until it's done, or else it will take even longer to finish. Not to mention that while files are copied, everything runs slower than it normally does.

The SSD clearly changes things, dramatically. To put things into perspective, I have benchmarked this Compaq 610 with and without the SSD, and here are the results.

The screenshot below shows the performance with the old HDD installed. 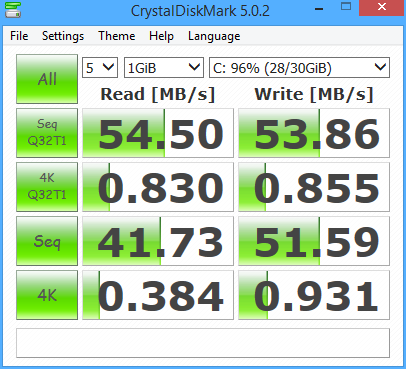 And here is how it performs with the Emtec SSD inside. 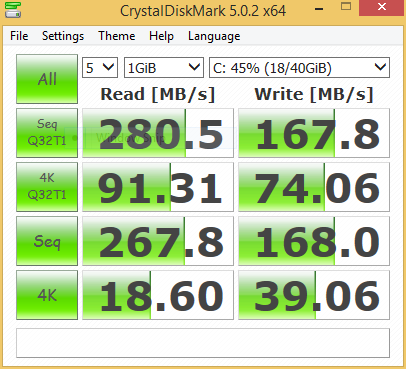 The benchmark clearly shows that the SSD easily outperforms the HDD in all areas, but what it does not show is just how the extra performance boost translates into real-life performance. Keep in mind that the laptop does not support SATA III (6 Gbps throughput, or 750 MB/s), so the Emtec drive is limited to the slower SATA II speeds (3 Gbps throughput, or 375 MB/s). This limits performance when performing concurrent tasks.

I have come up with a basic test to show how long it takes to get Google Search to open from the moment I hit the power button. It is a cold boot to usable Google Chrome test, if you will. I measured the times using my smartphone; since the differences will be considerable, a more accurate measuring method is not needed.

With the HDD installed, it took 70 seconds until Google Chrome opened the Google Search landing page from a cold boot. Until I was asked to enter the PIN, roughly 34 seconds have passed.

With the SSD installed, the Google Search page showed up after just 44 seconds, while the lockscreen was displayed after only 16 seconds. Both figures are impressive for such an old device.

The biggest differences in everyday use is in terms of loading times. Programs open much faster now, and triggering different features in one is done quickly. Google Chrome is more responsive when switching tabs, Explorer takes less time to load everything, and so on.

Multitasking, while clearly not the laptop's forte given the puny processor, is more than adequate; switching between programs does not take long, and they are immediately responsive afterwards, which is not something I could say of the laptop when fitted with the HDD.

It is easy to recommend an SSD as the first upgrade to make for an old PC, because it is a much cheaper option than buying a new device. Even if you end up with a new device, if it does not have an SSD, I wholeheartedly recommend buying one. There are some great models around now, and the prices will only be going down in the long run.