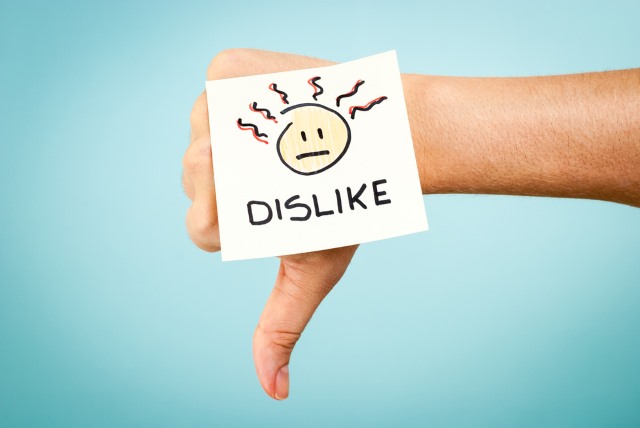 You've probably heard talk recently of Facebook adding a Dislike button or an 'empathize' button. While this is certainly something that has been in the news, it is not yet a reality -- and it has created a great opportunity for scammers to cash in on people's impatience.

We don’t get know exactly what form the Dislike button will take, or when it will appear, but there are now several scams in operation that lure in victims with the promise of instant access to the yet-to-be-released feature. A variety of techniques are employed by scammers to encourage victim to "Download the official DISLIKE button now". It is, of course, a fake, and there are a number of things to look out for.

Posts that appear to originate from Facebook friends may offer the opportunity to watch 'shocking' videos -- including one purporting to show a snake vomiting up a hippopotamus. Having been enticed into try to watch such a video, or perhaps to complete a questionnaire or survey, the offer of the dislike button appears.

If the victim grants permission, a Facebook app is then installed that has access to their account and can post messages on their behalf. One of the first things the scam app does is to post a message informing the victim's friends that they have just installed the official Dislike button in the hope of attracting more people to do the same.

The ease with which Facebook apps can be created means that scammers can quickly jump on the latest craze and use it as a hook for attacks. Facebook can jump on rogue apps as they are discovered, but it doesn’t take long for replacements to spring up to fill the void.

So remember: there is (as yet) no Dislike button for Facebook. Any app or site that says it can give it to you is lying.