Microsoft explains why it's pushing Windows 10 so aggressively (spoiler: it's to keep you safe) 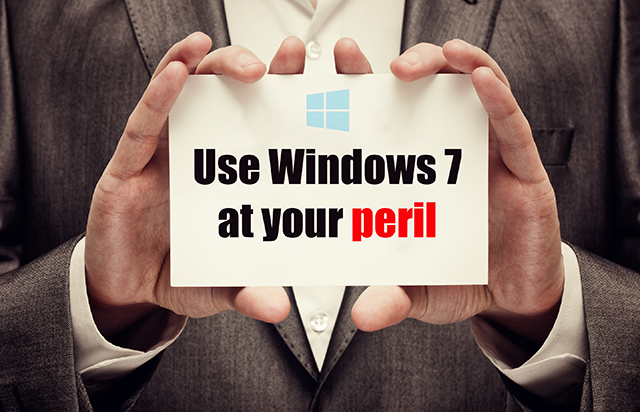 It’s understandable that Microsoft would want to push Windows 10 as much as possible, particularly as the rate of upgrades has been slowing recently. It must be a source of frustration to the company that users of Windows 7 and 8.1 appear so reluctant to switch, even though the upgrade for them is free.

In an effort to guide people on to Windows 10, Microsoft has been using increasingly aggressive methods, including pre-loading the installation files on to users’ systems, regardless of whether they want the new OS or not, and removing the option to opt-out of the upgrade. In the new year Microsoft intends to ramp up its push further, and joining the Windows Weekly team for a question and answer session, Microsoft Marketing Chief Chris Capossela made no apologies for his company’s approach which, he says, is being done to get users to a "safer place".

Sure, users can stay on Windows 7, if they wish, but according to Capossela, you do so "at your own risk, at your own peril".

It’s worth listening to the full Q&A (embedded below), which also covers HoloLens, Surface 4 and Surface Book update, and Windows 10 Mobile with Continuum, but it’s what Capossela had to say about the Windows 10 push which is most interesting:

Look, we made Windows 10 for free, for anybody who has a Windows 8 or 7 machine. You can call that freemium if you want, but that was a decision... you know we didn’t take that decision lightly.

For us, it’s just so incredibly important to try to end the fragmentation of the Windows install base, and so we think every machine that is capable of running Windows 10 we should be doing everything we possibly can to get people to move to Windows 10.

But we do worry when people are running an operating system that’s 10 years old that the next printer they buy isn’t going to work well, or they buy a new game, they buy Fallout 4, a very popular game, and it doesn’t work on a bunch of older machines.

And so, as we are pushing our ISV [Independent Software Vendor] and hardware partners to build great new stuff that takes advantage of Windows 10 that obviously makes the old stuff really bad and not to mention viruses and security problems.

So, we really are trying to push people to get to Windows 10. Now, the good thing about Windows is that lots and lots of people care, and you get constant feedback. You know, we’re willing to put up with some level of discomfort if we feel like we are getting more and more people to a safer, better operating system that’s frankly better for everyone in the ecosystem. It’s better for Intel, it’s better for Dell, HP, it’s better for our customers, but there’s no doubt we’re trying to find the right balance. There’s no doubt if we could start it all over we would have done a couple of things differently, I think.

The reality is with most modern devices, people just take it for granted that the device is going to be constantly updated. Whether it’s your iPhone, your Android tablet, or what have you, people are very, very comfortable with that notion. Xbox One owners are very comfortable with that notion that it’s just going to stay up to date. PCs, because of the history, and the legacy, it’s slightly uncomfortable for more people, and so we’re going to keep at it. We are going to try to find that right balance, but we just know there’s a lot of people out there who constantly kick the can down the street without a little bit more of a, frankly, a push.

And so, there’s no doubt with a base as big as ours, it is hard to move anyone to a new model without angering some people. We don’t want to anger anybody, but we do feel a responsibility to get people to a much better place, and Windows 10 is a much better place than Windows 7.

We will always give you a way out, but we’re trying to find the right threat balance.

It’s interesting to see Microsoft talking about protecting users and reducing fragmentation. While people refusing to budge from XP is definitely an issue, is there really a Windows fragmentation problem?

Microsoft describes Windows 10 as a much better place than Windows 7, but that’s debatable. Users on Windows 7 aren't in any more danger than those on Windows 10, provided they are sensible and have a decent security software installed, and all printers and new games -- including Fallout 4 -- will work perfectly on the older OS, both now, and in the future. If a PC can’t handle a new game, it’s a hardware upgrade rather than an OS one that’s going to fix the problem.

Microsoft knows it’s annoying some people with its aggressive Windows 10 push, but it doesn’t really care. There’s a slight whiff of "we know better than you" about Capossela’s comments and while there are definitely some people out there who plan to upgrade but are procrastinating -- or "kicking the can" as Capossela puts it -- there are plenty of users who don’t want to switch because they are perfectly happy where they are, or because they don’t like what Windows 10 has to offer them.

Maybe instead of trying to force users of older versions of Windows onto its new OS, Microsoft should take the time to figure out what it is about Windows 10 that’s keeping users away.

450 Responses to Microsoft explains why it's pushing Windows 10 so aggressively (spoiler: it's to keep you safe)