Microsoft's cloud first, mobile first philosophy seems to be paying off. The company today announced its Q2 2016 earnings, with profit and revenue exceeding predictions. Revenue fell very slightly to $25.69 billion, but this was still higher than analysts expected; the slight drop has been partially blamed on a decreased interest in Windows.

Confidence in Satya Nadella's leadership seems high, with stock prices rising by more than 26 percent in the last year. His belief in the cloud appears to be paying off, with Microsoft's Intelligent Cloud business generating revenue of $6.3 billion. Overall, the company expects its entire annual cloud revenue to hit $9.4 billion, up from $8.2 billion.

Looking to the cloud, Nadella said: "Businesses everywhere are using the Microsoft Cloud as their digital platform to drive their ambitious transformation agendas. Businesses are also piloting Windows 10, which will drive deployments beyond 200 million active devices."

Cloud revenue jumped by 5 percent, and Microsoft has a number of highlights in this area: 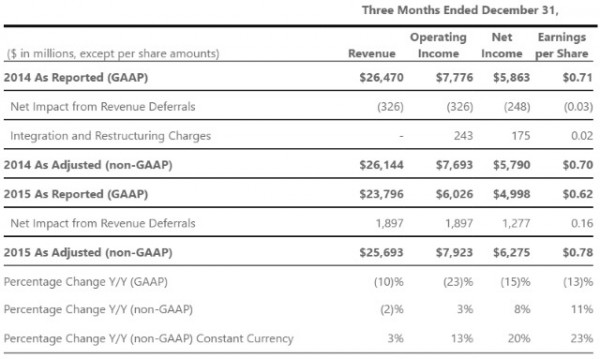 In addition to the decreased interest in Windows, the slight fall in revenue has been attributed to shifts in currency, but the company is understandably pleased with the figures. COO Kevin Turner says:

It was a strong holiday season for Microsoft highlighted by Surface and Xbox. Our commercial business executed well as our sales teams and partners helped customers realize the value of Microsoft’s cloud technologies across Azure, Office 365 and CRM Online.

As well as surprise, analysts were quick to lay praise at Microsoft's door. Patrick Moorhead from Moorhead Insights & Strategy said:

Microsoft’s cloud success can no longer be looked as a “one-off” or luck, it’s becoming a giant business that could give Amazon a run for its money. Amazon is a lot larger, but Microsoft is narrowing the gap.

Microsoft did better than the PC market in operating system licensing revenue than the market, but unless PC units improve, it will be impossible to increase this Windows number. 2016 will be a big year as it is very likely, that if there isn’t a GDP collapse, we will see many businesses moving from Windows 7 to Windows 10.

The company is hedging their PC bets in services like Office 365 and OneDrive which performed great with >50% growth. Their iOS and Android service bets appear to be paying off.