My Apple iPad Pro adventure begins [first in a series] 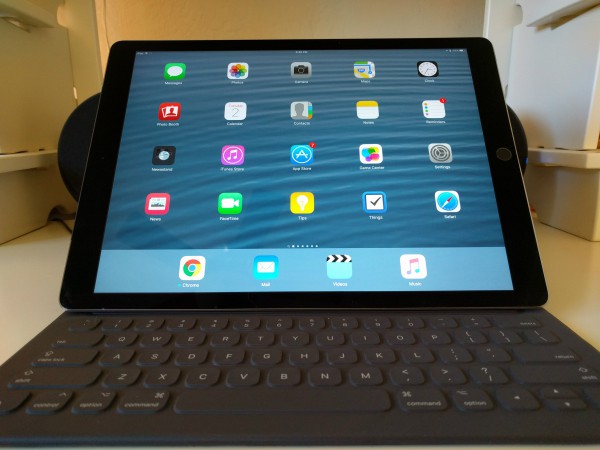 The first thing you notice about iPad Pro is the size. The tablet is ginormous. Its 12.9-inch screen lays before you like a chalk slate -- a blank canvas demanding typed text or drawings made with Apple Pencil. Yet something also feels wrong about the thing. During the so-called Steve Jobs era, refined designs were smaller -- like iPod nano. Apple is no stranger to larger; 27-inch iMac today or 17-inch MacBook Pro of yesteryear are examples. Perhaps. But there's big, and BIG.

The giant tablet arrived around 2:50 p.m. PST on Groundhog Day 2016, marking a bold computing adventure for February: Using iPad Pro as my primary PC, and hopefully only one. Perhaps you read my recent obituary to Apple love lost and might wonder why buy anything Apple? I like to experiment and am paid to try out new things (so you won't have to). By sheer size, PC replacement -- not companion -- is the only sensible use for iPad Pro. Can it meet the demands? I want to find out.

This isn't my first adventure of this kind. On July 31, 2011, I started a summer sojourn using a Samsung Chromebook, which became my primary PC. But three months later, frustrated by lacking utility and performance problems, I put aside Google's then new platform. The experience nevertheless changed my computing lifestyle, pulling my habits from desktop applications to their browser-based, cloud-connect counterparts. Following the release of Samsung Chromebook 550, in May 2012 I made the switch. I've gone back to Apple a few times since but get better overall utility -- as a writer -- from Google platforms. My primary PC is Chromebook Pixel LS -- or was before the next, grand experiment's start.

I have no plans to give up Pixel, which is a joy to use. But iPad Pro intrigues, and I will soon start a podcasting project for which webapps don't deliver the utility I want. Let's see what Apple's big-ass tablet can deliver. Apps are there, and they should be easier to use on the larger screen.

To repeat:  I also want to answer for my satisfaction, and hopefully for yours, whether a tablet can replace a PC, as Apple contends. Someone surely will ask why not Surface Pro 4 or Surface Book? Two answers: They're outside my cash-out-of-pocket budget, and both Microsoft device run desktop operating systems. They are PCs. IPad Pro falls into aebulous category, because of iOS. Can the apps be enough? Are ingrained habits a barrier to switching. Little things, like doing away with mouse and trackpad. I don't use Macros or specialized keyboard shortcuts, unlike many other PC users. The answers to these and other questions will unfold as I write about my experience.

I ordered iPad Pro on Jan. 31, 2016, from my local T-Mobile store, adding the cost to my monthly phone bill. The carrier sells the 128GB cellular model in Space Grey or Gold. I chose the muted of the two. As I type this paragraph, the tab has been out of the box for about two hours.

I purchased the Smart Keyboard from my local Apple Store. Typing has a tacky feeling, by the way,  that concerned until surprisingly finding touch typing to be so easy and accurate. I am pleasantly surprised by the keys' responsiveness and touch-without-looking placement. Warning: There is no backlighting, making accurate touch-typing all the more important.

Apple Pencil is perennially sold out at the local store and an online order wouldn't deliver for at least nine days. So yesterday, February 1st, I contacted Apple PR requesting a review loaner. To my surprise, the team obliged and the stylus shipped for arrival February 3rd. This is the first review product that Apple has sent me in six years. Or is it eight?

Smart Keyboard doubles as a cover and stand. The Apple Way or no way is a truism. With Surface Pro 4, users can tilt back the screen to desired angle. Using the Smart Keyboard, there is but one choice. But that's okay. The angle is perfectly chosen (can't promise you will agree). I write this first impressions foreword directly into WordPress using Google Chrome, which got a big rendering engine update during the last week of January.

Got to say: The overall user experience surpasses my expectations, which admittedly were low. The screen is bright and crisp. Performance feels fast from fumbling around; it's smooth. As a tablet, iPad Pro promises to be a grandmaster. I can see that already. I will let you know about laptop replacement as the series unfolds. That's a wrap.