Apple vs. the FBI isn't at all the way you think it is 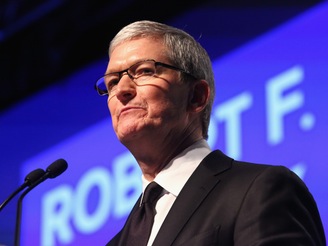 The FBI holds an iPhone that was owned by one of the San Bernardino terrorists, Syed Rizwan Farook, and wants Apple to crack it. Apple CEO Tim Cook is defying the FBI request and the court order that accompanied it, saying that cracking the phone would require developing a special version of iOS that could bypass passcode encryption. If such a genetically modified mobile OS escaped into the wild it could be used by anyone to crack any current iPhone, which would be bad for Apple’s users and bad for Amurica, Cook says. So he won’t do it, dag nabbit.

That’s the big picture story dominating the tech news this week. However compelling, I’m pretty sure it’s wrong. Apple isn’t defying the FBI. Or at least Apple isn’t defying the Department of Justice, of which the FBI is supposed to be a part. I believe Apple is actually working with the DoJ, which doesn’t really want to compel Apple to do anything except play a dramatic and very political role.

Now for some more details. In order to get their court order the FBI had to tell the judge that its own lab couldn’t crack the phone. Or maybe they said their lab didn’t crack the phone. Nobody knows. But the first question any cynic with technical bones would ask is, "Can’t the CIA/NSA/Steve Gibson, somebody crack that darned iPhone?"

John McAfee, who is one of my absolute favorite kooks of all time says he can do it, no problem, in about a month. McAfee says the FBI is just cheap and unwilling to drop big bucks on the right bad guys to make it happen, which kinda suggests that iPhones have been broken-into before, doesn’t it?

There’s something that doesn’t smell right here. The passage of time, the characters involved, the urgency of anti-terrorism make me strongly suspect that the innards of that iPhone are already well known to the Feds. If I were to do it I wouldn’t try cracking the phone at all, but its backup on a Mac or PC or iCloud, so maybe that’s the loophole they are using. Maybe they didn’t crack the iPhone because they didn’t have to. Or maybe some third party has already cracked it, leaving the FBI with that old standby plausible deniability.

Let’s drop for a moment the technical arguments and look at the legal side. If you read Fortune on this issue it looks like Apple will probably prevail. The legal basis for compelling Apple to invent a key for a lock that’s not supposed to even exist is flimsy. This does not mean that the FBI couldn’t prevail in some courts (after all, they convinced the judge who issued the original order). But it’s really a legal tossup who wins at this point, or appears to be. Remember, though, that when it comes to lawyers Apple can probably afford better help than can the U.S. Government.

So Apple’s being seen as an unpatriotic pariah with Silicon Valley companies like Facebook and Twitter only in the last few hours finally starting to support Cupertino.

Before I tell you what I think is actually happening here let me add one more piece of data. At the same time the FBI is pushing for unprecedented power to force decryption of devices, another news item appeared this week: Columbia University computer scientist Steve Bellovin has been appointed the first technology scholar for the Privacy and Civil Liberties Oversight Board -- the outfit that oversees these very activities at federal agencies including the NSA, CIA and, yes, the FBI. Up to this point the Board has never had as a voting member someone who actually understands this stuff in real depth. And professor Bellovin does much more than just understand this technology, he’s publicly opposed to it as co-author of a seminal report, Keys Under Doormats: Mandating insecurity by requiring government access to all data and communications. The report, which was published last July by MIT, clearly takes the position that the FBI is wrong in its position against Apple. Not legally wrong -- this isn’t a legal document -- but wrong in terms of proper policy. Just as the Clipper Chip was a bad idea when I wrote about it right here almost 20 years ago, this forced hacking of iPhones is a bad idea, too, or so claims Bellovin.

Would Donald Trump, Ted Cruz, Marco Rubio, or even Jeb Bush have appointed Bellovin to that board? I don’t think so.

So wait a minute. There’s a plenty of reason to believe that Apple complying with the FBI order is bad policy, it’s legally shaky, and at least one of the people who makes the strongest arguments in this direction is now voting on a secret government board? What the heck is going on here?

What’s going on is Justice Antonin Scalia is dead.

Had Justice Scalia not died unexpectedly a few days ago (notably before the Apple/FBI dustup) and had the FBI pursued the case with it landing finally in the Supreme Court, well the FBI would have probably won the case 5-4. Maybe not, but probably.

With Justice Scalia dead and any possible replacement locked in a Republican-induced coma, the now eight-member Supreme Court has nominally four liberal and four conservative justices but at least 1.5 of those conservatives (Justice Kennedy and sometimes Chief Justice Roberts) have been known to turn moderate on certain decisions. This smaller court, which will apparently judge all cases for the next couple years, is likely to be more moderate than the Scalia Court ever was.

So if you are a President who is a lawyer and former teacher of constitutional law and you’ve come over time to see that this idea of secret backdoors into encrypted devices is not really a good idea, but one that’s going to come up again and again pushed by nearly everyone from the other political party (and even a few from your own) wouldn’t right now be the best of all possible times to kinda-sorta fight this fight all the way to the Supreme Court and lose?

If it doesn’t go all the way to the Supremes, there’s no chance to set a strong legal precedent and this issue will come back again and again and again.

That’s what I am pretty sure is happening.