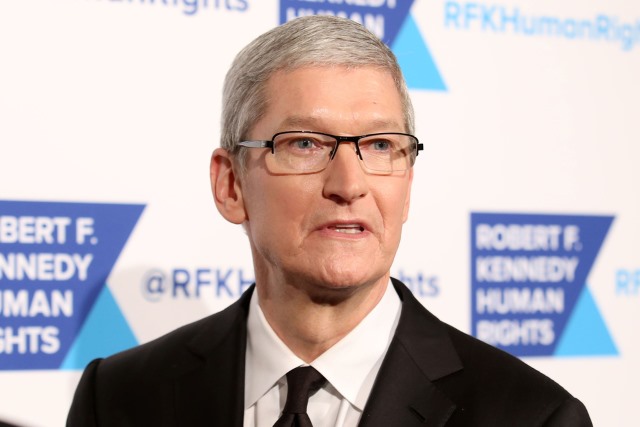 In the Apple vs FBI fight, the issue is very black and white for many people; you support Apple's position of standing firm against the FBI, or you believe the FBI should have unfettered access to whatever data it wants, regardless of the consequences.

Tim Cook has been steadfast in his position, but in an interview with TIME the Apple CEO admits that the situation is not entirely binary. Presented with a thought experiment Cook appears to concede there are gray areas, opening up the possibility of assisting the FBI to break into the San Bernardino shooter's iPhone.

The full transcript of Tim Cook's interview has been added to the TIME website, and it makes for interesting reading. Cook comes across as understandably weary of answering, largely, the same questions over and over again, and it's clear that the situation is taking its toll. He says that one of the reasons -- and there are many -- Apple is not going to help the FBI to crack or disable encryption is that "they don’t know if there’s anything on it".

I think everybody recognizes that there may not be anything on it, there may be something on it. What I'm saying is, to invent what they want me to invent puts millions of people at risk.

This is a point that many people have raised, so Cook is not winning any points for originality here. But the interview takes an interesting turn when he is presented with a theoretical situation that has many parallels with the Apple vs FBI case

TIME: So being mindful of the fallacy of the hypothetical, suppose on the other side of the door is the nuclear device that's on a timer, or the child who's being tortured. And you have a key to that door.

COOK: If I had a key to that door I would turn that door. But that's not the issue here, just to be clear. It's not that I have information on this phone, and I'm not giving it. I had information. I gave all of it. Now they're saying, hey, you could invent something to grab some additional information. We're not sure there's anything on there, but we want you to invent this in case there is. And the thing that they want me to invent, that key can turn millions of locks.

Cook also highlights another problem with forcing companies to making their encryption algorithms available to government or law enforcement agencies -- ultimately it just pushes people into using other services and going deeper underground:

If you're worried about messaging, which I think is primarily the worry in this scenario, people will just move to something else. You know if you legislate against Facebook and Apple and Google and whatever else in the US, they'll just use something else. So are we really safer then? I would say no. I would say we're less safe, because now we’ve opened up all of the infrastructure for people to go wacko at.

He is quick to stress that he is aware of the trade-off between privacy of individuals and the ability of government to gather data for security purposes:

I'm not targeting government. I'm not saying hey, I'm closing it because I don't want to give you any data. I'm saying that to protect our customers, we have to encrypt. And a side effect of that is, I don't have the data.

If the on-going encryption debate that Apple finds itself at the center of seems faintly absurd to you, Tim Cook gets you. He feels the same. Speaking about the fallout of Congress ruling against Apple, he says:

I think, first of all it's bad for the United States. Because going against us doesn't just mean going against us. It means likely banning, limiting or forcing back doors for [everyone]. I think it makes the US much more vulnerable. Not only in privacy but also in security. The national infrastructure, everything. And I can't imagine it happening because it would be outlandish for something like that to happen. I think everybody has better judgment than that.

But at the end of the day, we're going to fight the good fight not only for our customers but for the country. We're in this bizarre position where we're defending the civil liberties of the country against the government. Who would have ever thought this would happen?