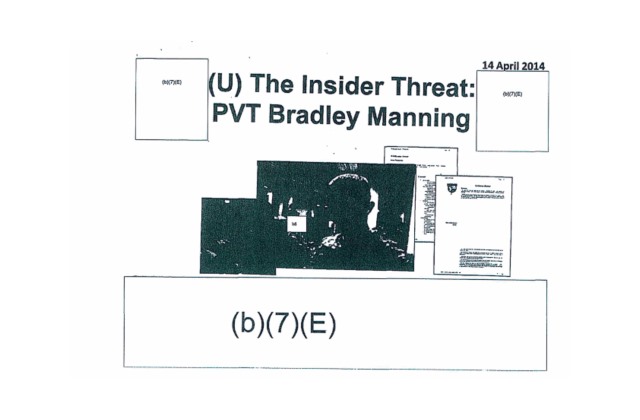 The US government is busy putting thousands of its own employees under 'permanent surveillance' according to a document obtained by Chelsea Manning. In the wake of leaks by the likes of Edward Snowden and WikiLeaks, the government set up the Insider Threat program in an attempt to nip future leaks in the bud.

It's a while since Manning was in the news, the last notable appearance being when the solider formerly known as Bradley Manning joined Twitter from prison. But the latest document released by Manning -- obtained using a freedom of information request -- shows that the government is not afraid to use NSA-style tactics on its own employees.

The Insider Threat program indicates that certain employees have been earmarked for 'continuous evaluation' if they exhibit particular characteristics or are thought to have certain motives. On the list of 'Insider Threat Motives' are people with financial difficulties, those with divided loyalties and those with certain ideologies.

The document, obtained by the Guardian, has been published online, and makes for interesting viewing. 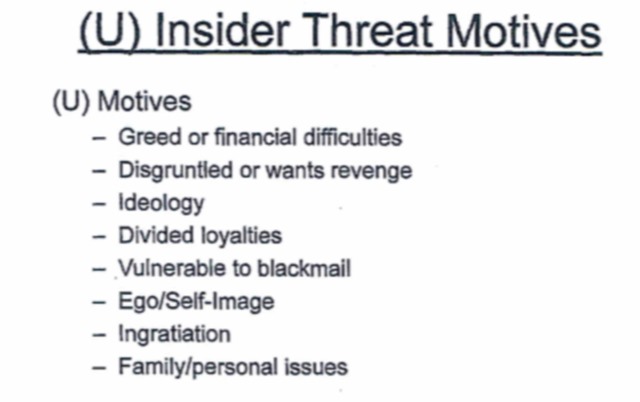 The government runs through the history of Manning's case (referred to as Bradley Manning throughout, as he was known in the army at the time) and goes on to define his motive for leaking data to WikiLeaks. He is described as being disgruntled with the army's attitude towards homosexuality, and also as aligning himself with a 'group of hackers' whose ideology he shared. Manning is also slapped with the labels of 'Ego and Ingratiation' and 'Family/Personal Issues'. Manning's 'behavior indicators' are also singled out.

The document concludes by saying that:

In the months following the US government's initial charges against me over the release of government records in 2010, the current administration formed the National Insider Threat Task Force under the authority of the Office of the Director of National Intelligence (ODNI), the Department of Justice, the Federal Bureau of Investigation and several other US government agencies.

The mission of this taskforce is breathtakingly broad. It aims at deterring threats to national security by anyone "who misuses or betrays, wittingly or unwittingly, his or her authorized access to any US Government resource". Unfortunately, the methods it outlines amount to thousands of government personnel being effectively under total surveillance.

It's a microcosm of the surveillance that is carried out in the wider world and Manning warns that there is a danger stemming from "a reliance on 'anonymous feedback' which can create endless witch-hunts, 'general invitations' to report or file complaints through so-called open door policies, and vagueness about what feedback is expected". The real concern is the carte blanche the program appears to afford the government:

The broad sweep of the program means officials have been given a blank check for surveillance. Agencies implementing the Insider Threat program could examine anyone who has motives of "greed", "financial difficulties", is "disgruntled”, has "an ideology" a "divided loyalty", an "ego" or "self-image", or "any family/personal issues" -- the words used to describe my motives. Such subjective labelling could easily be applied to virtually every single person currently holding a security clearance.

Manning may have concerns about the surveillance programs the government undertake, but she also has suggestions:

The Insider Threat program works against innovation, creativity and the prevention of institutional corruption. Perhaps this is the real intent of the intelligence community and the Insider Threat Task Force -- to instill fear and project dominance throughout the intelligence community, the military, and among government employees and contractors at large.

Perhaps a better approach for the government would be to create a Transparency and Accountability Task Force, comprising different government agencies and departments, the inspectors general, the National Archives and Office of Government Information Services, and a committee or other body that can work directly with current and former government employees, service members, veterans and journalists.

Such a taskforce could focus on advocating for and protecting employees who have concerns. It would help to send a message to employees, military service members, contractors and department and agency heads that even if the official channels fail, those who raise concerns will still be protected, listened to and given the chance to speak out in a meaningful forum. It would encourage dissent. It would allow dirty laundry, drama and corruption to be aired out rather than allowed to fester.

We could all -- citizens, the government and its employees -- benefit from that.