Manage, move and resize your desktop windows with WinDock 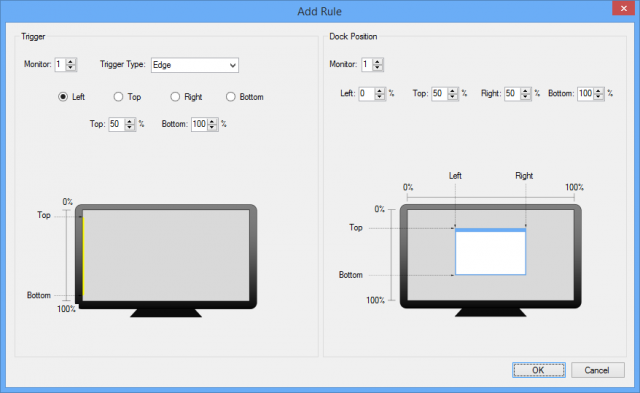 Windows snapping can be a convenient way to reorganize your desktop: just drag and drop a window to the left of the screen, for instance, and it automatically resizes to fill the left half of the display.

Not everyone is a fan. There are only a few snapping features. Some people find they’re easily launched by accident. And apart from turning them off, there’s no real configuration available at all.

Despite that, the core idea is a good one, and you can fix most of the problems by installing the freeware WinDock.

Initially this seems much like Windows 10’s Aero Snap. Drag an application to the top of the screen to maximize it, left or right to take up that half of the screen, into a corner to fill that quarter.

But, although it’s hard to measure precisely, this feels more accurate and reliable than Windows snapping. There we no accidental activations, and our windows were always left in the position we expected.

This would be interesting enough, but the best part of WinDock is that none of this behavior is fixed. It’s all based on rules which you’re able to view, edit and customize to suit your needs.

Rules are very flexible. You start by defining the event WinDock should look for: the mouse moving to a corner, a part of the left/right/top/bottom edge or a specific area of the screen, on a particular monitor if you’ve more than one.

And then you set the position you’d like that window to be relocated: the monitor, and its left/top/right/bottom positions, specified as a percentage of the current screen resolution.

The default settings profile has rules for every Aero Snap function, which makes it simple to customize. If you never use the left or right "maximize to half the screen" feature, for instance, you can turn that off while keeping everything else.

Alternatively, you might ditch all the regular rules and start from the beginning. What about dragging a window to the top centre third of the screen to maximize it on your second monitor? Just add the rules you need.

You could even do all of these things, by setting up multiple profiles with their own rules. So you might have a "Power user" profile which contains 50 rules, a "Minimal" profile with the single "Monitor 1 > Monitor 2" rule, and then you can switch between them as required.

WinDock doesn’t make any low-level changes that will mess up your system, either, so if any of this causes problems then it’s easy to fix. Simply close the program from its system tray icon and your desktop will behave just as it always did.

If you don’t need WinDock’s configurability, AquaSnap delivers improved snapping, and a lot of extras: window edges snap together when you’re moving them manually, double-clicking a window edge maximizes it in that direction, shaking a window makes it transparent and "always on top", and more.

And if that’s not enough, Preme delivers simple Aero Snap-type features and an array of other window management tools. It enables users to roll up windows, set them as "always on top", reposition and resize them, scroll them when they’re not active, and a whole lot more.

WinDock is a freeware application for Windows XP and later.