There's something you should know about 12.9-inch iPad Pro [seventh in a series] 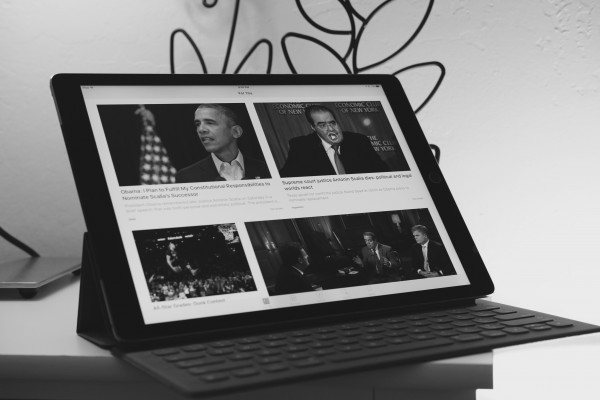 April 3, 2016 marks the first day that I truly could use Apple's over-sized tablet to replace my laptop. But I had to spend another $84, before California tax, to do it. Gadget reviewers who say that iPad Pro cannot be your computer are wrong. The apps, performance, and utility are there. Anyone creating content should consider this device as compliment to, or replacement for, an existing PC. The problem with 12.9-inch iPad Pro isn't what it can do but how much it costs to assemble what you need. This kit is far from budget-friendly, which also can be said of Microsoft's competing Surface Pro 4.

I started my iPad Pro sojourn on Groundhog Day, planning to use the device as my primary PC for 30 days. The objective: Apple CEO Tim Cook says the big-ass tablet can replace a personal computer, I want to see if he is right. The experiment isn't my first journey like this. I tried something similar during summer 2011 with one of the first Chromebooks. The path was a dead end. But Spring 2012, when new commercial models released, I started down the path again and never looked back. Google's Chromebook Pixel LS was my main computer before adopting the iPad lifestyle.

The tablet's biggest foible as laptop replacement isn't apps, hardware, or operating system but the charging system. The 12-watt brick that Apple ships in the box is inadequate. While battery life is excellent, and enough to last a workday for common tasks, recharging takes a long time. More perplexing, you can't really use iPad Pro and charge simultaneously; there isn't enough juice. An Apple Store specialist recently acknowledged the problem, noting that display models often drain the battery even when plugged in.

But there's a fix. Last month, the company released a lightning-to-USB-C adaptor that lets iPad Pro charge using 12-inch MacBook's 29-watt brick, and the changeover makes a huge difference. In my testing, battery recharges in less than half the time—comparable to my experience with MacBook Pro. The tablet also adequately recharges when in use, as you would expect with any laptop. But to get that utility, you pay extra: $49 for the brick, and either $25 or $35 for the cable, depending on length (1 or 2 meters, respectively). Most users will want the longer cord, which is comparable-length to the one they already have.

That extra cost leads into the price equation and where the math adds up for some buyers but not for many others. The overall kit is pricey. The value is there, and on this point I disagree with most other reviewers. That said, price-wary shoppers can get as much, or more, computing benefit elsewhere by spending lots less.

Last month, Apple released a second, iPad Pro that packs same-size screen as the Air 2—9.7 inches. I am testing one of these, too, and with similar objective as the bigger model; seeing what role it can assume alongside, or instead of, a laptop. Preview reaction: Pretty good kit. With the new model's availability, the Pro line now ranges from $599 to $1,229. It's the high-end models that are more suitable for comparing with a laptop; for price and performance.

None of these devices is exactly low-cost for the utility given. Microsoft Store sells a broad selection of Windows 10 laptops with touchscreens and 256GB SSDs for under $1,000; many go for less than $800. Selection is broader still from Amazon. While Windows users can choose touchscreen models at most major price points, Mac buyers get nothing. For touch in a laptop-class device, iPad Pro is the only option.

Notice that my comparisons focus on storage, and also screen size and resolution—12.3 inches and 2736 x 1824 resolution for Surface Pro 4; 12.9 inches and 2732 x 2048 for iPad Pro; 13.3 inches and 2560 x 1600 for MBP Retina. Processor and RAM are purposely ignored, because in my testing comparison is meaningless—even using benchmarks. iPad Pro's A9X chip and 4GB RAM deliver subjectively fantastic performance in day-to-day use. There is no perceptible lag compared to my Chromebook LS or MacBook Pro Retina Display, both of which pack i7 processors and 16GB RAM. The larger iPad Pro brings Apple back to the PowerPC era, when comparison to Intel chips quite literally was apples to oranges.

Modular design, powerful performance, and bountiful apps put the iPad Pro in PC replacement territory. But you will pay for the luxury. Whom should that be? Pencil pushers will love the fine control drawing or annotating. I am no artist and yet still see the nuances given; pen-to-paper like. Content creation is sometimes frustrating because of the file system, or lack of meaningful direct access to it. Nevertheless, keys, stylus, and touch open lots of control for editing photos or videos and creating documents, for example.

The keyboard is delightful. That is for me, I can't say for you. As expressed in previous installments in this series, my fingers find the keys by touch typing more accurately than any other keyboard,  Responsiveness and travel are excellent. There is only one angle for the screen, when using Apple's keyboard cover, and it's perfect for me. I'm a short guy; 1.68 meters tall (5 feet 6 inches). I sit low enough to the screen without slouching while level enough with the keys to accurately type. But I wonder about taller folks. Then again, Tim Cook is 1.9 meters (6 feet 3 inches) tall. If Apple's CEO doesn't tower over the rig such that the angle is bad, then maybe most anyone can comfortably use the branded kit. Still, a cheap laptop or Surface Pro 4 gives greater flexibility adjusting angle of the screen.

To my surprise, for typing, iPad Pro comfortably sits on my lap, without tipping off. I expected topsy-turvy, which would be a deal breaker for replacing a notebook. I suspect, and someone can correct me, that Apple's single-angle placement in the keyboard as holder maintains balance when the device is used off the desk and on the lap.

In a future installment, I will discuss the app experience and explain why it's surprisingly good enough for most needs, but by no means all. Apple News is a killer content consumption app. Then there is the Pencil and what you do with it.

Returning to the topic of cost, and what you get, I'm aghast that Apple ships such a dinky charging brick with iPad Pro. From about 10 percent level, setting the tablet aside, recharging often takes as long as 6 hours. The MacBook 29-watt brick pulls back the time to under 3 hours, which is good enough. Benefit maybe, but buyers investing so much in the kit shouldn't have to spend another $74 to $84 to get what Cook contends is possible: Tablet that replaces a laptop.

This post is seventh in a series; Parts One, Two, Three, Four, Five and Six.

35 Responses to There's something you should know about 12.9-inch iPad Pro [seventh in a series]