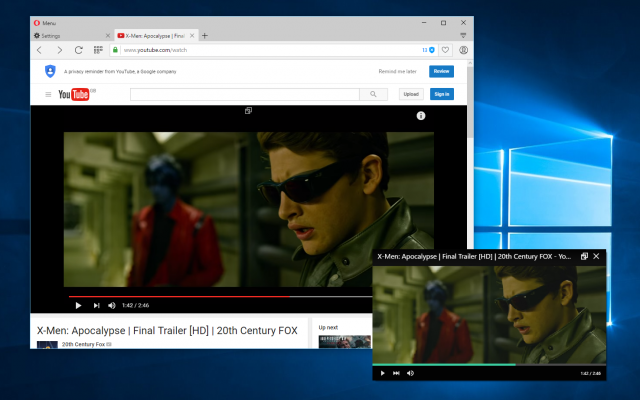 The ad-block feature has also been added to the brand new release of Opera Mini for Android 16.0, also out today.

Opera 37 opens by moving its built-in ad-blocking tool to the stable channel, having first unveiled it back in March. It starts off disabled by default, and then suggests users switch it on the first time a site containing blockable ads is loaded.

The current approach is rather blunt: users can switch the feature on and off, plus whitelist sites they don’t mind seeing ads on by clicking the shield icon in the Address Bar to review stats, run a speed test and make the change.

It’s all a bit longwinded -- while Opera claims the idea is to drive the industry towards more lightweight ads that aren’t disruptive, its speed test seems more concerned with demonstrating how great its ad-blocking feature is rather than offering any meaningful insight.

As a result, all sites are tarred with the same brush, whether they already take pains to make sure their ads don’t disrupt browsing or simply decide content is something to fit in between the ads.

From Opera 38, users will be able to import whitelists of sites -- for now, however, users can also manually add domains to the whitelists one at a time via Opera’s settings under Privacy & Security.

The other major new feature in Opera 37 is support for pop-out video. When watching HTML5 video, users will see a pop-out button appear above the main picture -- clicking this reveals a separate, resizable window, allowing users to browse other tabs while continuing to watch the video.

Other changes include a refreshed start page configuration panel, which now includes the ability to choose which items appear in the sidebar navigation panel, and a change to the program’s internal layout. Now settings, downloads, extensions and also flags share the same unified look and feel.

Opera Sync has been tweaked for stability, and the program has implemented the Google certificate transparency (CT) system to help discover and prevent certificate forgery. Extension developers will also be pleased to learn Opera 37 adds Chrome topSites API compatibility.

The release follows on the recent unveiling of Opera 38 Developer, which includes free private VPN service as well as offering more granular control over ad-blocking. It also allows users to select their own photos when creating a theme and Speed Dial improvements.

Opera 37 FINAL and Opera 38 Developer are both available now as freeware downloads for Windows, Mac and 64-bit Linux users. Opera Mini for Android 16.0 is available for devices running Android 2.3 or later.