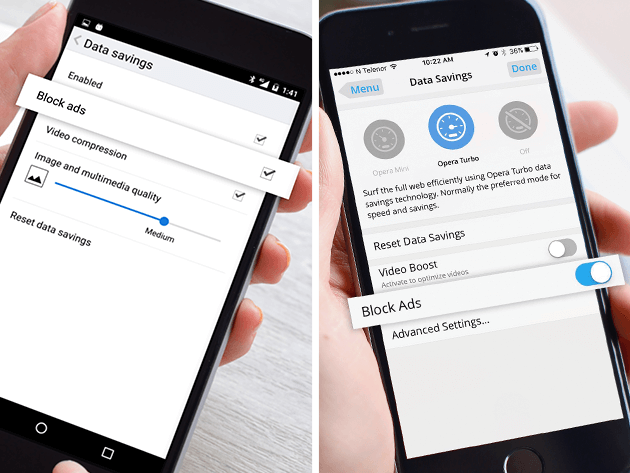 Opera Software made a bold move earlier this year when it introduced a native ad-blocker in its desktop Opera browser. While controversial, this feature is not enabled by default though promises to offer some major benefits, like a 40 percent boost in performance compared to an extension like AdBlock Plus.

However, folks are not only saying "No" to advertisements on their PCs but also on their smartphones and tablets. In fact, mobile ad-blocking usage has seen a 90 percent rise year-over-year, with more than 400 million devices said to run an ad-blocker. The latest versions of Opera Mini for iOS and Windows 10 Mobile and Opera for Android now cater to that growing audience too, as they too feature a built-in ad-blocker.

Unlike on a PC where blocking ads is very easy, things are different on mobile devices. Users have more restrictions, as the leading players in this market have more control over their user experience, and, as a result, blocking ads is more complicated. So, having this feature baked into a browser such as Opera is sure to get people's attention.

"Users are demanding ad blockers because of the better browsing experience it offers", says Opera Software SVP of Mobile Browsers, Nuno Sitima. "Opera users can speed up their mobile surfing, skip extra data charges and stretch their internet packages even further by blocking in the browser intrusive and data-wasting ads and heavy tracking".

Adding an ad-blocker in the mobile versions of Opera is not just about convenience. Opera Software says that, when compared to Opera for Android with the ad-blocker and data compression features turned on, Google Chrome is 14 percent slower at loading websites, while the Adblock Browser is a massive 79 percent slower.

Opera's efficient data compression also plays a key role there, as it enables the browser to shrink a webpage down to 229KB as opposed to 422KB (84 percent more) in the case of Google Chrome or 784KB (240 percent more) for Adblock Browser.

Opera Software has not provided any test results that compare Opera Mini to the default browsers on iOS and Windows 10 Mobile, but it is fair to say that they will at least be faster compared to prior versions without the built-in ad-blocker. Well, at least when it is turned on.

Just like on PCs, on mobile devices Opera does not have the ad-blocker enabled by default. The company wants to give users the choice to do so themselves, and, at the same time, not anger advertisers too much.

Worth mentioning is that the latest version of Opera for Android also gains support for web push notifications, which basically allows websites to send you notifications like those sent by native apps. Opera Mini for iOS, meanwhile, only gains bug fixes and performance improvements. There is no word on what else Opera Mini for Windows 10 Mobile adds.