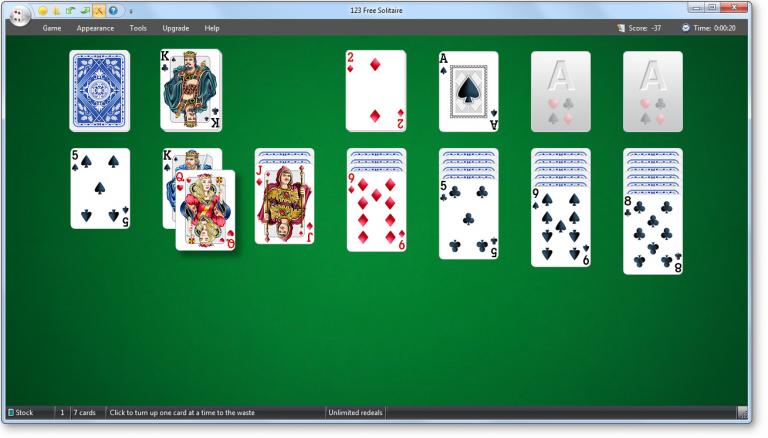 Windows 10 saw Microsoft replace the old-style Solitaire with a Windows app which pesters you with ads every time it runs.

This could be much worse -- the ads are only at launch, not while you’re playing -- but if you’re looking for an alternative anyway, here are three fun competitors for Windows XP/ Vista and later.

123 Free Solitaire looks as good as the Microsoft edition, and supports many more game types:

It’s also easy to play, opening with the standard Klondike game you already know from Windows and with very similar controls. You’ll be ready to play in seconds.

Game options and settings aren’t as extensive as you’ll sometimes see elsewhere, but if you’re just looking for a good-looking replacement for the regular Solitaire then 123 Free Solitaire will appeal.

PySol Fan Club edition is an old (2009/ 2010) fork of an ancient (2004) open source Solitaire project, so unsurprisingly it can’t compete on visuals.

What you do get are many more game variants, 1000+ in total. As the developer explained:

"There are games that use the 52 card International Pattern deck, games for the 78 card Tarock deck, eight and ten suit Ganjifa games, Hanafuda games, Matrix games, Mahjongg games, and games for an original hexadecimal-based deck".

For us, PySol’s highlight is the huge number of configuration options. You can change cardsets, backgrounds, animations, sounds, mouse actions, hint levels, the look and feel of the interface, and more.

Big Solitaires 3D fits somewhere between the first two packages– there are 40+ game types and variants, but all rendered with OpenGL, 3D-type effects.

Like the others, the package includes the standard Klondike, but it’s mostly about more challenging games: Canfield, Easthaven, Golf and more.

The interface isn’t as smooth or professional as 123 Free Solitaire, but if you’d like to learn some new games then it’s worth a try.