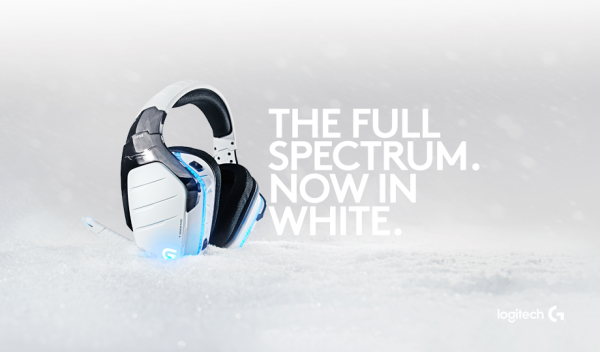 During the colder months, some folks look forward to the summer so they can have fun in the sun. Yeah, at first hanging out in the pool or at the beach can be totally fun. When hardcore heatwaves hit, however, and the temperature becomes too much to take, the summer novelty quickly wears off.

In many places this week, it has been sweltering -- my air conditioning has been cranked up in both my house and car. Today, Logitech announces a new way to cool down -- sort of. Well, not really. You see, the existing G933 Artemis Spectrum 7.1 Wireless Gaming Headset is getting a fresh coat of white paint. The company is calling this edition 'Snow' which, from a psychological aspect, sounds pretty good to this sweaty gamer. Phew!

Last year I reviewed the wired variant of this headset (in black), the G633, which you can read here. You can watch my unboxing of the Snow variant of the G933 below.

The Logitech G933 Artemis Spectrum Snow 7.1 Wireless Gaming Headset builds on the G633 that I rated highly, with wireless connectivity and a really beautiful white paint job. If you don't already own a quality gaming headset -- such as the existing black G933 -- this new 'Snow' variant looks gorgeous. White Xbox One S owners in particular should love the matching color!

If you are interested in purchasing the Logitech G933 Artemis Spectrum Snow 7.1 Wireless Gaming Headset, you can get it today for $199. It is being sold exclusively at BestBuy.com, or from Logitech directly.