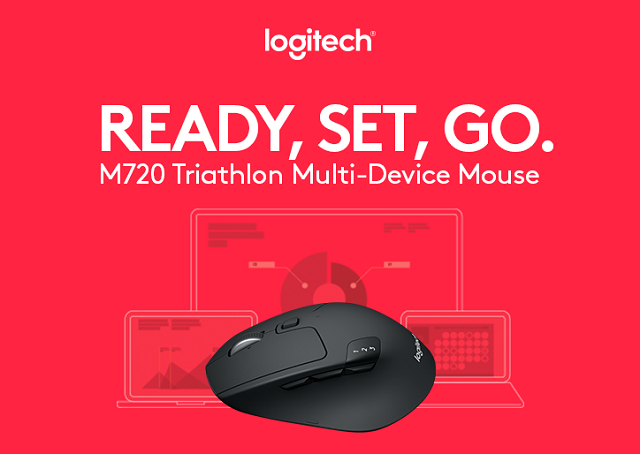 Nowadays, running more than one operating system on your computer is a breeze. Modern Linux-based operating system installers, for instance, take most of the hard work out of setting things up -- it used to be a much more difficult affair. It is not uncommon for people to dual-boot, say, Windows and Ubuntu. Heck, some folks even tri-boot with OS X.

A problem with running multiple operating systems on one machine is Bluetooth pairing. If you own a Bluetooth mouse, for instance, every time you switch the OS, you have to pair again. This becomes extremely tedious. Today, Logitech announces a product that alleviates that pain-point. Called the M720 Triathlon Multi-Device Mouse, it allows easy switching between up to three computers and/or operating systems.

"Designed for people who switch between multiple operating systems and screens, the Logitech M720 Triathlon Multi-Device Mouse can help boost productivity for people who work and live in a multi-device world. Thanks to Easy-SwitchT technology, the M720 Triathlon can pair with up to three devices, and seamlessly switch between them with the touch of a button", says Logitech.

The manufacturer further says, "the mouse features dual connectivity, so you can connect to your devices through the included Logitech Unifying Receiver or Bluetooth Smart wireless technology. With a hyper-fast scroll wheel and durable design, the M720 Triathlon Multi-Device is ready to go the distance – no matter how long your to-do list might be. It has a full-sized sculpted shape that fits comfortably under your hand, and, with the Logitech OptionsT software, you can customize your experience to fit your Windows or Mac OS X needs".

Logitech lists support for Windows, Mac, Android, and Chrome OS, but omits traditional Linux desktop operating systems. With that said, a Bluetooth pointing device should work on Ubuntu, Fedora, and others without issue. The company produces a similar multi-device keyboard called the K480 which I reviewed here. That device worked fine with traditional desktop distros -- the Logitech M720 Triathlon Multi-Device Mouse should too.

It is interesting that the mouse supports connectivity with either Bluetooth or a USB dongle. I like this approach, because the dongle can be used when navigating your computer's BIOS if it supports a mouse pointer -- something not possible with Bluetooth. It will also allow it to work with computers that do not have Bluetooth, such as desktops and older laptops.

The Logitech M720 Triathlon Multi-Device Mouse is not rechargeable, instead using an AA battery. While some folks will be disappointed by this, keep in mind that Logitech claims 2-years of usage on that little battery. Road warriors can easily buy AA batteries at convenience stores and airports, making it preferable to recharging for some.