A new weapon against terrorism 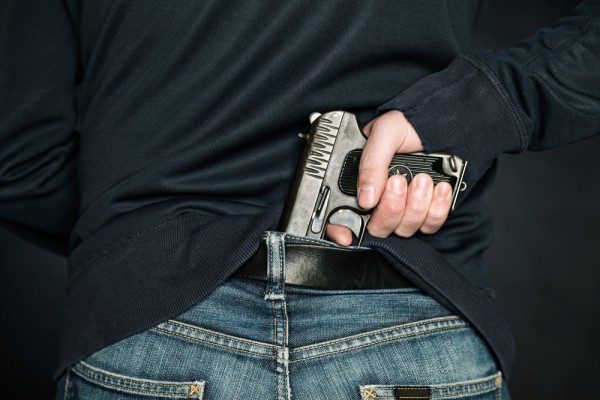 San Diego, Calif. The cop convention is in town this weekend, and I have never seen so many men in blue-grey suits or uniformed officers strutting sidearms. Quite possibly the safest-feeling place in San Diego through October 18th is the Convention Center and the areas around it—that is unless you're a lawbreaker or someone as afraid of men and women in uniform as clowns. What the hell is this clown craze anyway? Yeah, that's off-topic.

The International Association of Chiefs of Police holds its 123rd annual conference, which I blasted through (poor choice of words, I know) yesterday for a specific, and interesting product launch: Patriot One's NForce CMR1000; self-described as a "covert primary screening device for the detection of on-body concealed weapons at access points including hallways and doorways of weapons-restricted buildings and facilities". I met with CEO Martin Cronin and Chief Science Advisor Natalia Nikolova.

There's something Star Trek-like about interviewing an executive with title chief science advisor, rather than, say, the more typical chief technology officer. CSA seems oh-so more authoritative and evokes connotations of research and development based on something sound and true—rather than contrived, as so much of the so-called innovation coming out of Silicon Valley seems to be; eh, Facebook, Instagram, SnapChat?

Patriot One is far removed from venture-capital obsession-land, with headquarters in Mississauga, Ontario, Canada. But the international flare goes further. Cronin is a Brit and Professor Nikolova is Bulgarian. They impressed during our meeting with succinct, no-BS answers to questions about Patriot One's first product, which with the IACP 2016 announcement moves into early deployments.

Cronin describes the CMR1000 as a "cognitive microwave radar for the detection of concealed weapons". The technology can be "deployed overtly or covertly in a small space profile, giving a very, very high degree of accuracy to detect a weapon concealed on somebody passing through an entranceway". Range is up to 12 feet.

Patriot One's invention "is most effective with metallic weapons, such as handguns, rifles, metallic shrapnel and explosive vests, hand grenades—anything that has metal is certainly detectable", Nikolova explains. "Ceramic handguns is possible to detect", but "explosive powders, no, or gels. This is a radar detector. It is not a chemical detector".

That makes the product more suitable to preventing gun-related mass-shootings or domestic terrorism at public venues—such as schools, shopping malls, or sports arenas. "The applications are frankly unlimited", the CEO says. "We have a number of key pilots coming up—courthouses, entertainment centers, legislative buildings; we're looking at a range of target sectors". I ask about potential customer interest. "There is huge appetite for this technology", he answers.

Concealment makes the CMR1000 less intrusive, or obvious, compared to metal detectors and related systems. I understand from experience. During the latter days of the Bill Clinton Administration, the Chief of Staff met with Washington, DC-area tech writers. I reported for CNET at the time. While we walked through the White House, an alarm sounded at a juncture in the hallway—and Secret Service quickly pulled aside one of the other journalists. He had set off the radiological detector. I heard one agent ask: "Have you had an X-Ray recently?" Two days earlier. I don't recall whether or not the other writer joined us.

This is exactly the kind of covert deployment, Patriot One envisions. Had there been a real threat, the perpetuator would have been caught unaware and, presumably, unprepared.

"If you look at a number of recent attacks, attackers carry a concealed weapon and they start to use it prior to the point which they know they are going to be discovered", Cronin explains. "They will not necessarily know, unless you tell them". Meaning: "You can detect the weapon before they take it out and use it".

Additionally, CMR1000 can be deployed where metal detectors would be inconvenient or disruptive—such as concert halls or shopping centers.

But use of stealth detection also raises concerns about privacy and misidentification. What if that concealed weapon is legally licensed to a citizen or carried by, say, an off-duty law enforcement officer? For the latter, "cognitive" in the technology's naming may answer during pilot deployments. Meaning: How effectively will CMR1000 separate concealed carries into potential threats and non-ones.

Artificial intelligence promises improved detection even years after initial deployment. "The radar is combined with machine learning, some clever algorithms, which understand what that radar signal coming back means", Cronin says. "So it's not a dumb system. It's a very smart system that analyzes the signature coming off the subject".

I ask if NForce learns over time based on detections and locations. "That's exactly it", Nikolova answers. "Because it is based on learning machines, also known as classifiers. You can constantly update your knowledge about what is a threat and what is not a threat. While radar hardware is fixed, the "classifiers are constantly updated" and the "system can learn continuously about the environment, about new threats, and about new non-threats".

Is there a Cloud aspect, I inquire, or is the learning just localized to each deployed system? "Every single unit will receive regular updates", Cronin responds. "As the database grows of known artifacts, so will every unit out in the field be updated and have greater and greater knowledge of what it's looking for".

How many artifacts, I ask. More than 40 weapons are currently in the database, which is "being expanded all the time", Cronin says.

As we warp up, I opine about current fears about terrorism. "I wish we lived in a world where there was no need for this technology—but sadly we do", Cronin sighs.

Nikolova is bold in her confidence: "This technology is pretty much going to prevent the growth of terrorism and gun violence". She says this looking at what comes next. "What we think as engineers—that only money and time is required to turn this technology into portable. Wearable. Even installable on cell phones. Eventually it will come to that". She predicts "maybe 10 years from now. But it is gonna come".