The real cost of downtime 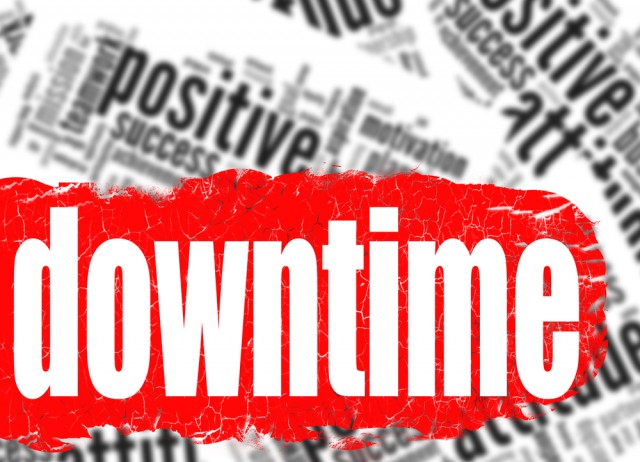 One of the best things about today? Stuff just works.

Consider the hours you once spent tapping your pen to the tune of broadband dial-up. And what about blowing on your Sega cartridge to get the game to load? These are a thing of the past.

Nowadays, super-smart digital devices line our pockets. They’re practical, adaptable, our own personal portals that transport us instantly to anywhere our hearts desire. One minute you’re reconnecting with long-lost friends on Facebook, the next you’re perusing the Etsy marketplace, and then onto booking a last-minute trip to the Costa del Sol. What a time to be alive.

But are things really that perfect? The answer is no. At least, not yet. Think of the volume of complaints ticketing companies receive every year when hopeful festival-goers lose out due to website crashes.

However, as long as the highs outweigh the lows, consumers are remarkably forgiving when browsing online. They get over the disappointment of shoes missed out on, gigs unattended, and quickly move on to their next thrill.

The magic of number nine

When it comes to website hosting, businesses are also relatively indifferent.

Unless they work in the field, very few have an interest in what happens to keep their site afloat. Broadly speaking, businesses just want things to run smoothly and their customers to be happy. Typically, they find a suitable hosting company, probably via a rudimentary Google search, sign a Service Level Agreement (SLA) and that’s that.

What businesses usually don’t realize is that built into the vast majority of these hosting agreements is a magic number. Uptime -- the total amount of time a website is live across a given period -- is traditionally set at 99.9 percent. That means website downtime – the period when a website crashes, stopping people from logging on -- is essentially a given; 0.1 percent of the time it’s fine to be offline.

The real cost of downtime

This figure doesn’t seem like a lot. Besides, what’s a glitch here and there? This common sentiment, which so many businesses must share given they sign these agreements, is what makes the furore over a recent outage at Amazon Web Services (AWS) all the more surprising.

AWS is one of the world’s largest providers of cloud services and is critical to many online businesses. When its S3 storage solution went down due to "high error rates" in its Northern Virginia data centers, the likes of Airbnb, Business Insider and Netflix were among those to experience poor performance or total failure. As businesses were left in the dark, the press went into overdrive. How could such a figurehead of online prowess have let this happen?

What many critics don’t realize is that Amazon has functionality within its estate to engineer around this sort of issue. For example, many other businesses were impacted by this outage because they had deployed their services into a single Amazon "region," contrary to recommendation. Often customers choose not to opt into certain web hosting services on grounds of cost or that they just did not know they existed.

Therein lies the rub. Although hosting clients are starting to get more of a handle on SLAs, detail often goes unexplained. AWS SLAs, for instance, work quite differently to other hosting companies -- in that they have different agreements depending on the specific components, such as web server, storage and database -- which goes to show how complicated they can be. Businesses need a helping hand to understand what they are buying into.

Think about it. For companies that do operate on a standard SLA set-up, the 0.1 per cent of "allowed" downtime really equates to 43 minutes per month, or nearly nine hours per year. Imagine if that downtime occurred for a high-street retailer during Black Friday or Boxing Day sales, or for a travel company at peak holiday booking season.

According to Statista, total UK ecommerce revenues over the next five years are predicted to be £440,772 billion. Against current SLA standard downtime, that means more than £440 billion of sales revenue being risked during the same period. For big businesses, the cost of downtime is potentially massive. For small online businesses, it could be a deal-breaker.

A risky business for brands

The AWS glitch caused problems for many online businesses, but it was also a necessary evil -- it put the value of good web hosting in the spotlight.

Losing money is one obvious consequence of downtime. However, businesses also need to think about the negative impact on their brands.

We recently conducted a study of 1,000 UK consumers to better understand what happens during downtime. Sixty-eight percent of people said their opinion of a brand would be negatively impacted if its ecommerce platform crashed, while 37 percent would avoid buying from a brand because of downtime. Perhaps more worryingly, 45 percent of respondents reported having been shut out of a website they were planning on purchasing from during the week before they were polled.

Suddenly, downtime appears rife. For brands that don’t take necessary precautions, such as choosing a web hosting partner that can educate on the real cost of downtime, it is a risky business. After all, as the saying goes, it takes a lifetime to build a reputation and only a few seconds to destroy one.

This might not ring true for every company. But what if Twitter, which is relied on by millions as a platform to engage with the world, crashed during a major election. In the UK, conversation around online voting is gathering momentum. Imagine if the platform went down at the crucial time.

Like it or not, our future is digital. More and more businesses will need an online presence -- and a strong web hosting infrastructure to support it. Glitches like AWS’ are par for the course as we continue towards a world where everything just works -- but they also point to a pressing need to better educate people about the technology underpinning their businesses. When it comes to web hosting, a stitch in time really does save nine.