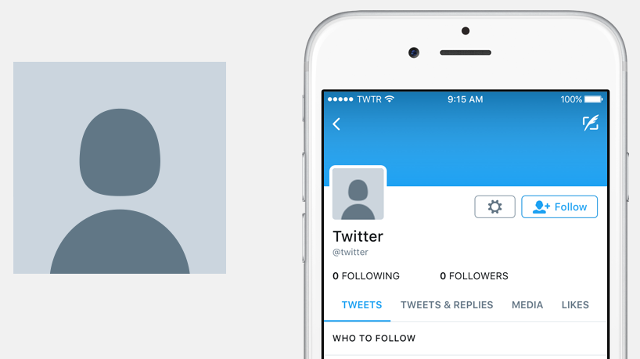 Twitter is a great social network, but it has many problems. Targeted harassment is rampant, causing much pain to some users. Many tweets are sexist, racist, and worse -- threats of harm. Sometimes it seems like the company doesn't listen to users either -- it feels like feedback is simply unheard. Just yesterday, the company changed the way replies work, leading to spam and confusion -- a really negative experience. Heck, the company's stock has been terrible too.

Despite all of these concerns, Twitter is unveiling a new default profile picture today. This seemingly superficial change during other outrages is a little bit frustrating, as the company's priorities seem out of order. But oh well, here we are. The new default image is no longer an egg, as the company is adopting a colorless grey gender-neutral picture instead. It is not the first time the default image has changed, but the timing is just awful.

Twitter is making the change for a few reasons, but most surprisingly, it felt that the egg was too attractive. In other words, some users liked the look of the egg, so they kept it. This is not what the social network wants -- it prefers users upload real images of themselves, so that they can better engage with the site.

Also, many evildoers were creating fake accounts, leaving the egg image as they harassed others. This created the notion that all accounts with the default egg were bad people. Actually, many people just do not want to share their picture for legit reasons. These good people were looked at as being potential harassers.

The problem, of course, is that as time marches on, this new default image will be associated with the harassers. Twitter is simply kicking the can down the road, putting a band-aid on something that needs surgery. The company needs to do a better job of creating a safe environment, not changing the look of the bad people.

So how did the company choose this gender-neutral image? Twitter set forth with some guidelines. It set the rule that the final product must be "Generic, Universal, Serious, Unbranded, Temporary, and Inclusive."

Once it had the principles in place, the company explains how it proceeded.

We went through many iterations to develop the new profile photo to make sure it displayed those traits. First, we explored gray, generic images to communicate that this profile photo is intended to be temporary. We looked at figures, photos, and patterns. For the figures, we thought about combinations of very common, circular shapes – these were a good starting point because they didn’t have any notable physical attributes. Because photos are usually communicated with a landscape icon, we felt that this was also a good route to explore. We additionally considered a simple, line-based pattern to try something without a figure.

After deciding on a figure, we began our refinements. We had to determine how to bring inclusivity into our single default profile photo, given that we don’t require people to specify their gender on Twitter. We felt that the circle of the head in the figure still seemed masculine, even though it technically had no design characteristics to indicate that it was a man. So for inspiration, we looked at how women are portrayed in generic, wayfinding iconography, such as bathroom signs, and noticed that the only difference between the sexes is the shape of their clothing.

Regardless, people have come to associate the circle head with masculinity, and because of this association, we felt that it was important to explore alternate head shapes. We reviewed many variations of our figure, altering both the head and shoulders to feel more inclusive to all genders. When the shoulders were wider, the image felt overly masculine, so we decreased the width of the shoulders and adjusted the height of the figure. As a result of these iterations, we ended with a more gender-balanced figure. We chose grays because they feel temporary, generic, and universal. With that, we included a higher contrast color combination to make this image accessible for those with visual impairments. Because of its coloring, the new profile photo also gives less prominence to accounts with a default profile photo.

Look, the new default image is fine. I am dubious that it will inspire users to change the image to something personal, but that is up in the air. The real issue here is that it feels like the social network is on fire, and rather than getting a hose to extinguish the flames, Twitter is roasting marshmallows. In other words, enough of the fluff -- we need real change, Twitter.

What do you think of this new image? Tell me in the comments below.