My nerdy pilgrimage to the Microsoft campus in Seattle 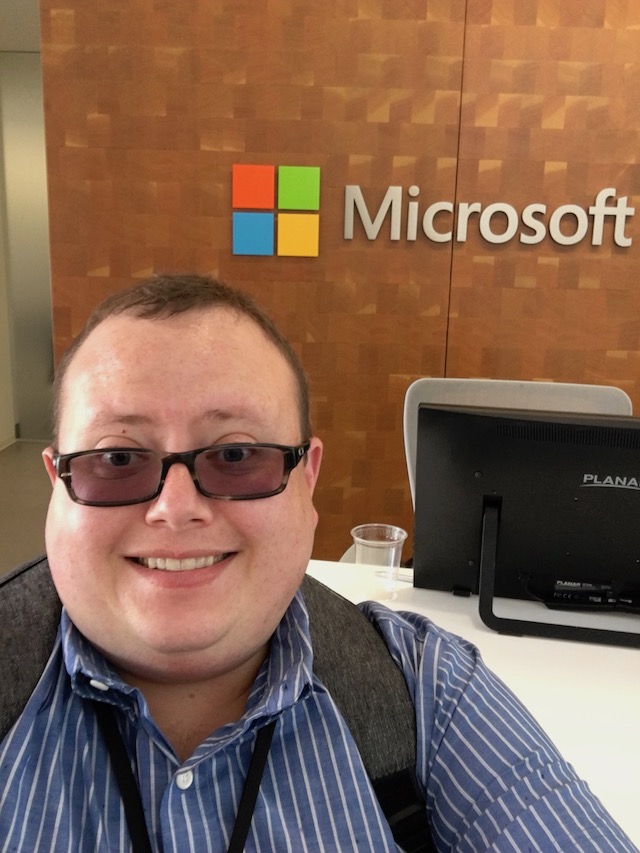 I was recently in Seattle for Microsoft's Build 2017 developer conference. It was a monumental trip for me, as I had never been to the west coast before. Being a New Yorker, the furthest west I'd ever been was Colorado. Getting there was an interesting experience in itself, as I had a layover in Minnesota -- yet another place I had never been.

On the final day of Build 2017, some journalists -- including yours truly -- were invited to a tour of the Microsoft campus. This was an invitation I couldn't pass up. As a self-proclaimed computer nerd, visiting such a historic place -- a nerdy pilgrimage, if you will -- was on my bucket list, so I jumped at the opportunity.

The official name of the experience is "Microsoft Underground Tour." It is designed to provide a good representation of the life of a Microsoft employee. With that said, since this was a single day tour, that isn't totally possible.

To start things off, all the invited journalists met in the lobby of a Seattle hotel. When it was time to go, we were loaded into a couple of shuttle buses, and we headed to the campus. Although the trip was not long, it was still a nice way to see more of Seattle. 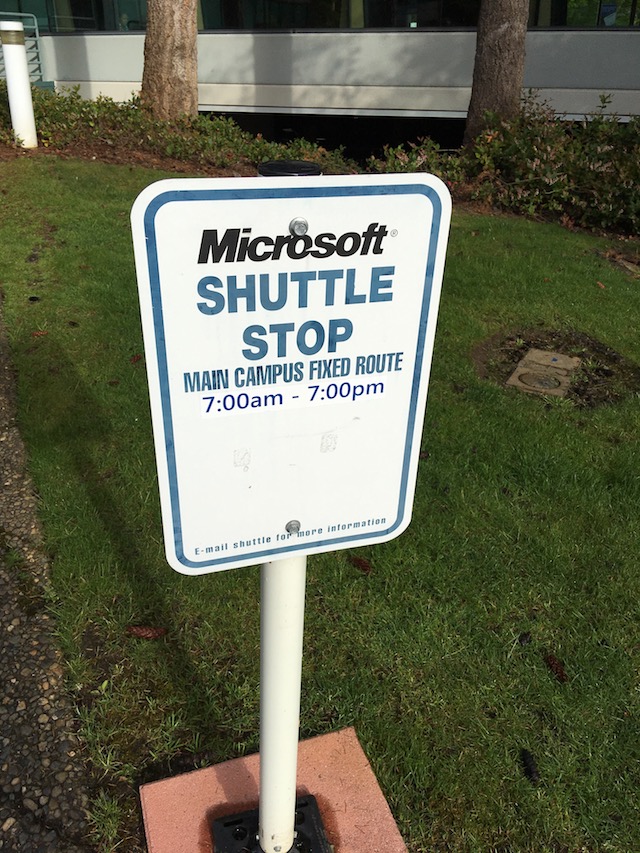 Once we arrived, we were led to a body of water known as "Bill Lake". This is a bit of a misnomer, as it is more of a man-made pond. The "lake," as you can guess, is named after Microsoft founder Bill Gates. It was here that Microsoft used to celebrate new software releases. In fact, Gates would apparently jump in the koi-filled water when certain deadlines were met in order to motivate employees. 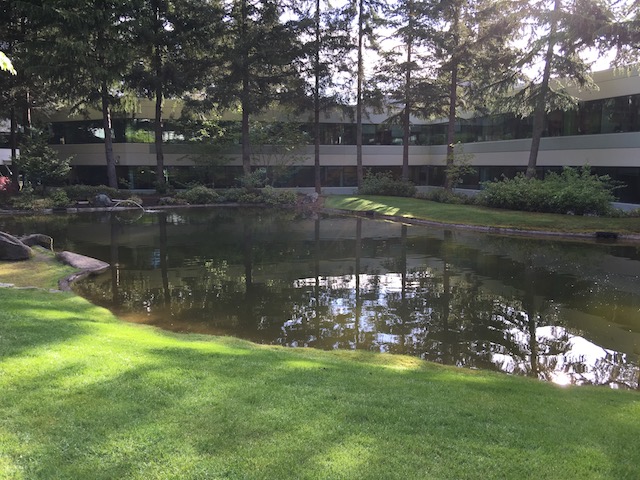 Bill Lake is allegedly the location of a great romance story as well. We were told that it is a bit of an urban legend, but Bill Gates supposedly met his eventual wife, Melinda, while looking at the lake. You see, from his office, he would see a light on in another office across the lake. Wondering who was always working long hours, Gates investigated and discovered a young lady named Melinda. The rest is history. 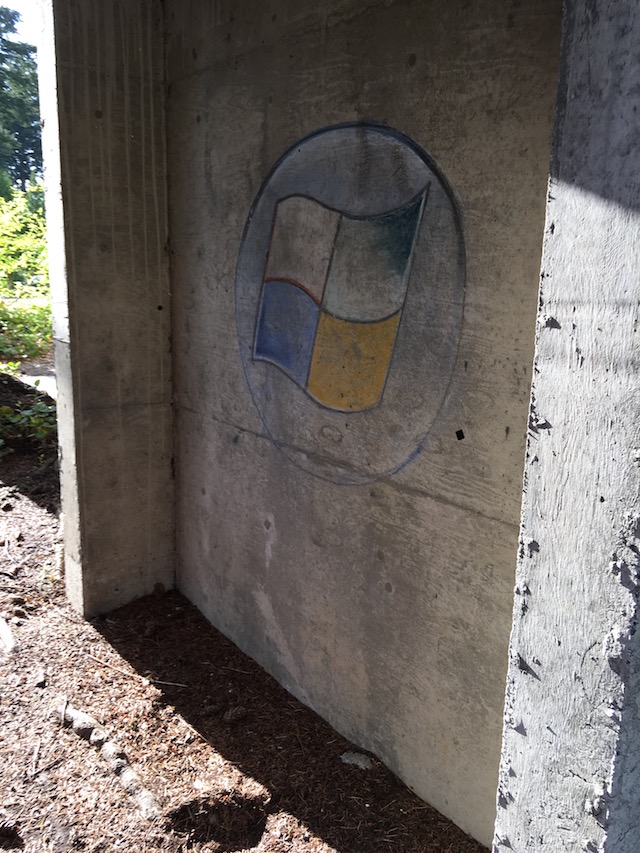 As we exited the lake area to go to the next location, I discovered a really cool Windows Vista logo in graffiti. As you can see below, I of course took a selfie with it. While many people disliked Vista, I actually liked the operating system very much. With powerful hardware, the OS ran like a champ. 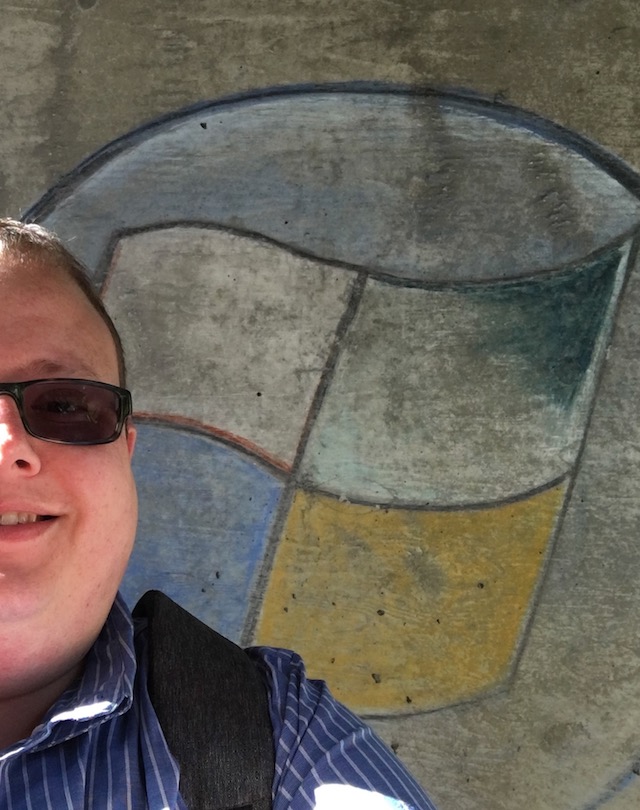 Next, we were treated to a nice buffet-style breakfast -- eggs, bacon, pancakes, coffee and the like. All of the plates, cups, and utensils were biodegradable, as being "green" is a recurring theme at Microsoft. Once the food was on our plates, and we were all seated, we had a nice discussion regarding what we would be doing that day. The first stop would be Microsoft Research and the second would be "The Garage." The last leg of the tour would be focused on the campus dining experience. Food is definitely something in which I am interested! 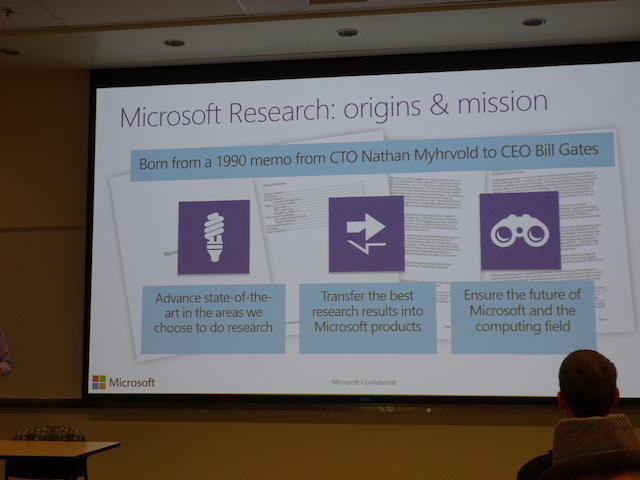 We loaded onto the buses once again, and headed to the Research building. Here, we were treated to more coffee -- something I always love. At this location, we would witness some presentations by Microsoft employees. This was the highlight of the tour for me, as it was very substantive. It was explained to us that most Microsoft Research projects fail, which was to be expected -- there is no shame in failure. We were given a presentation of some very interesting Microsoft Research projects, and two in particular really resonated with me. The first of which was a "smart trap" to capture mosquitoes for the purpose of experimentation. Called "Project Premonition," it can actually detect the type of insect, and only capture the ones that the scientists are interested in.

This trap uses robotics as a means to lure and trap the insects, and then valuable data is collected. What kind of data? Microsoft explains that the mosquitoes are turned into "juice" for the purpose of sequencing their DNA. You can see a talk about this in the video above. This should hopefully lead to better ways of fighting mosquito-spread disease.

Keeping on the topic of information, the other thing that blew me away is the use of Surface Hub -- Microsoft's giant touch-based computer -- to visualize Excel data. Now, data can be very valuable, but only when it is used to tell a story. Also important is knowing your audience. Sure, some folks may like perusing raw data, but high-level executives often don't have the time for such things. Data scientists need to find the most effective way of telling a story. With Surface Hub, the data can be presented in numerous interactive ways, allowing the reader to tune it for the best consumption. Remember, not everyone has the same type of brain -- people comprehend best in different ways. 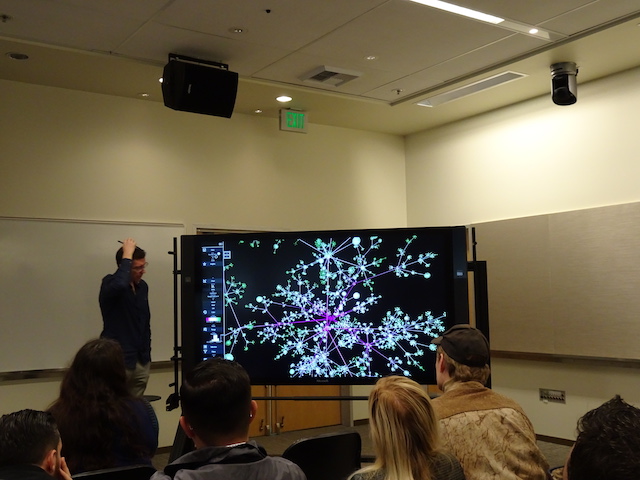 Taking this a step further, the Surface Hub presentations can translate to mixed reality with HoloLens. Imagine how useful it could be for the president of a company to put on AR or VR glasses for a truly new way to consume charts and numbers -- it has the potential to be revolutionary.

Next up on the tour is Microsoft's legendary "Garage". This is essentially a maker space where outside-of-the-box thinking is encouraged. Not all of the projects here will necessarily be profitable or even widely used -- but they could be. Heck, employees are even welcome to work on independent projects that aren't even intended for Microsoft! I found a really cool 3D-printed Surface VESA mount dock here too.

Is it throwing things against the wall to see what sticks? Sort of, but it is much more than that. these are very bright people using the latest technology and trends to find solutions that could change the world.

We were treated to a couple of interesting projects that were born from the Garage and are actually being used on the Microsoft campus. One is called the "Lend-o-Matic." This is a re-purposed food vending machine that dispenses devices and other accessories at no cost. Once you are done with what you borrow, you simply return it. 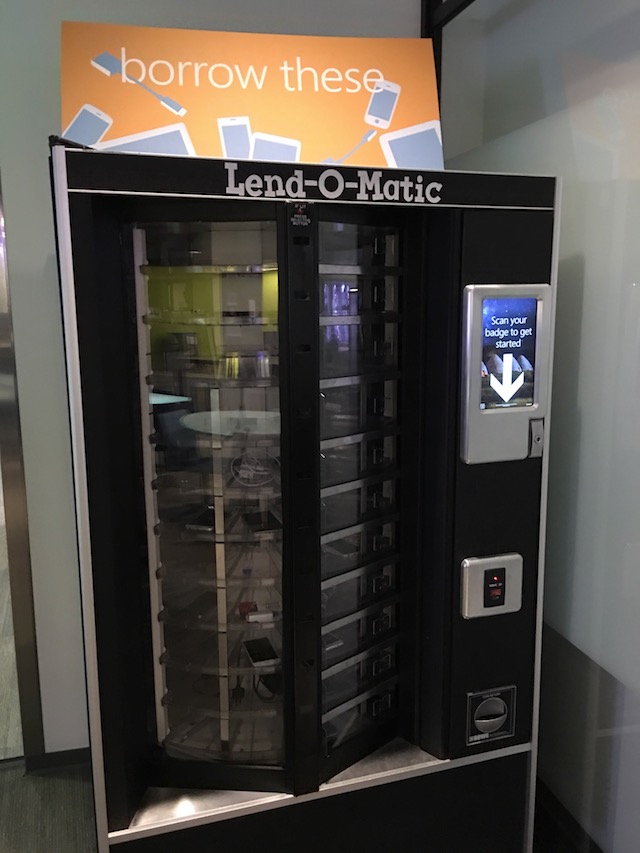 The other really neat thing is the growth of plants. The Garage developed a giant canister for growing plants using hydroponics. This is not just for beauty purposes -- what grows in them is eaten by Microsoft employees. You see, some of the herbs and lettuce that the dining areas serve come from these stations.

The next and final stop of the tour was two of the dining areas. As a plus-sized gentleman, I was definitely interested in this! All joking aside, I do like to eat. Not only would we get to see Microsoft employees eating in their natural habitat, but we would get to try the food too. Now, if you are expecting hamburgers and bologna sandwiches, you are very much mistaken. The Windows-maker doesn't just ship in some third-rate grub. The company hires professional chefs that cook with a focus on natural ingredients. 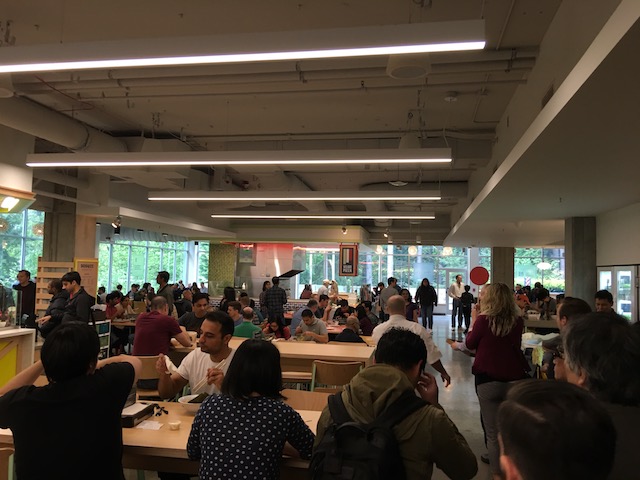 The first food we sampled was some sort of Indian chicken thing. Upon putting the meat into my mouth there was a massive explosion of flavor. It turns out, Microsoft imports the Indian spices and grinds them in-house for freshness. Seriously folks, it was one of the most intense flavor experiences of my life. 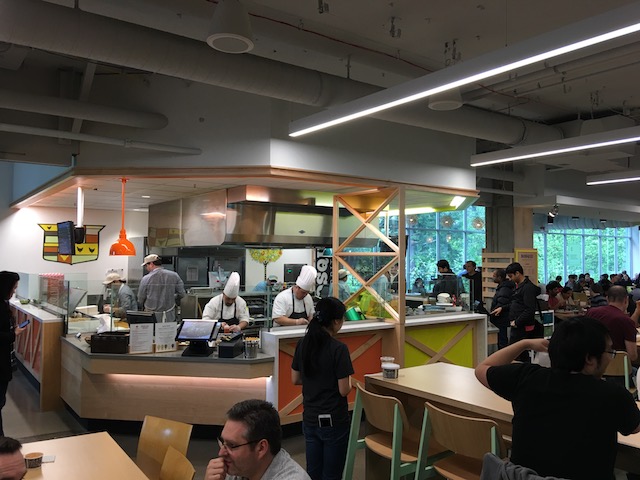 Next up we had some delicious beef, followed by a mini chicken taco. The taco was significant, as the greens on it were grown hydroponically on the campus. As I said previously, Microsoft is very proud of its efforts to be green. It is important to note that it is not merely a means of sustainability, but taste too -- the freshness really comes through.

The pizza was absolutely excellent -- a square, thin-crust affair. While you can get a traditional cheese slice (served by the inch), there are some modern takes on the food too. For instance, they had a conservative salami and pesto, but also some far-out options like Reuben or Lox and Cream Cheese (yuck!). I stuck to pepperoni, thank you very much! 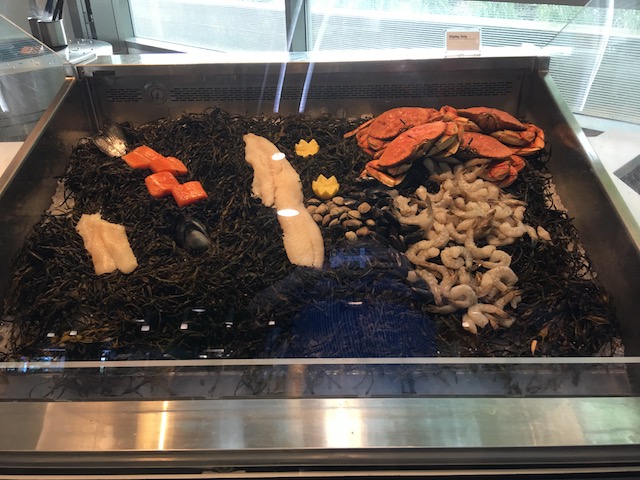 Believe it or not, they even had fresh fish available. Microsoft employees get to dine on in-house-made New England clam chowder that is quite divine. Next to the seafood station was Microsoft's take on "Chik-Fil-A" -- called "The Coop" -- where they served us a surprisingly very spicy fried chicken sandwich. I am not a huge fan of spicy foods, and this had my eyes watering a bit -- I am told this is one of the more popular options, however. 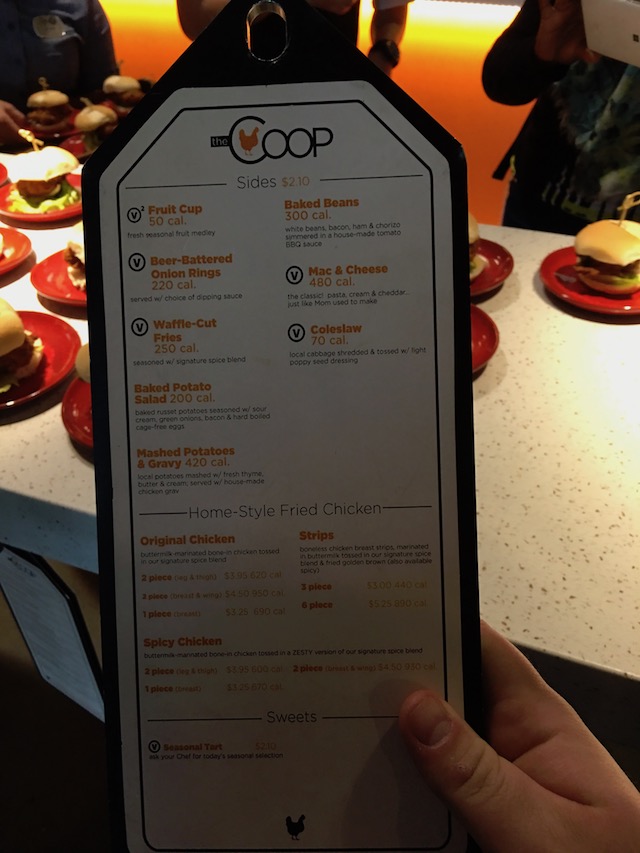 Since this is Microsoft, even the coffee bar has to be high-tech. When ordering a cappuccino, they have a special printer that can "print" on the foam. They can add messages, logos, or any picture, really. 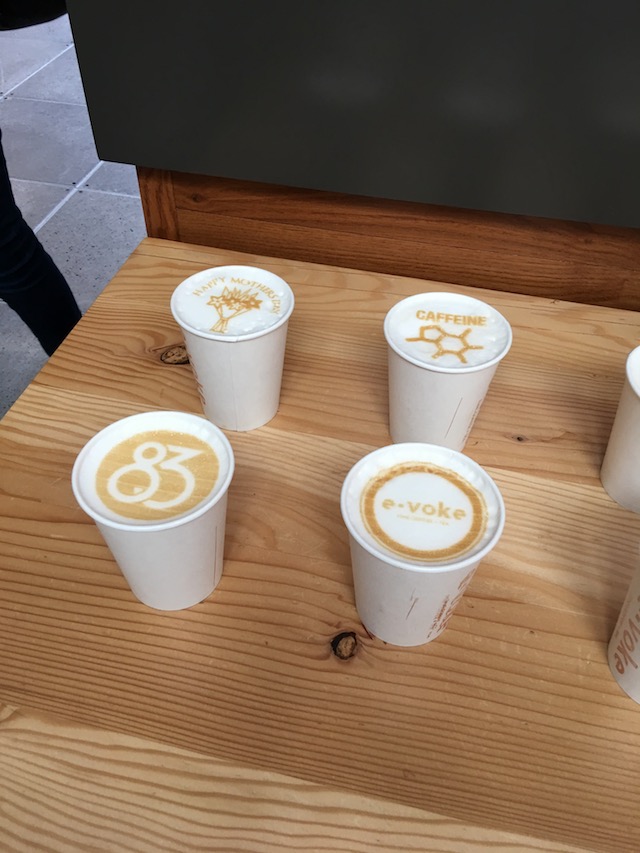 Not all eating options need to be full-on meals, of course, so Microsoft has set up a series of stores on campus too. Here you can get a granola bar, yogurt, energy drink, and more. What makes these interesting is that there are no cashiers -- it is entirely based on the honor system. The employee swipes their badge, scans the food or drink item they are buying, and then they pay electronically. It is a cashless system.

When I say "honor system" you might think there would be rampant theft. Well, Microsoft has thought of that -- there are cameras watching at all time. As one Microsoft employee told me, it wouldn't be worth risking a high-paying job to steal a Snickers bar. Good point.

I was told that the tracking is simply used to learn more about what the employees are choosing, so that the company can make smarter choices about quantities of items to buy and offer. That does makes sense. Not to mention, it should be expected that a company like Microsoft would make use of all the data it can. However, there is the potential for abuse.

Imagine an employee makes poor food selections everyday. Rather than salads or other healthy options, he or she chooses tons of fried food and soda. With healthcare costs rising, could Microsoft raise premiums or charge fees to employees that overeat on unhealthy foods? I am not saying that will happen, but the possibility exists. Sadly, after my grilling of the man in charge of the dining hall about privacy, it was time to go. Heh, no that didn't cause me to be ushered out -- it was the planned ending. Yes, My Microsoft tour was over, so I had to get onto the bus and head to the airport. 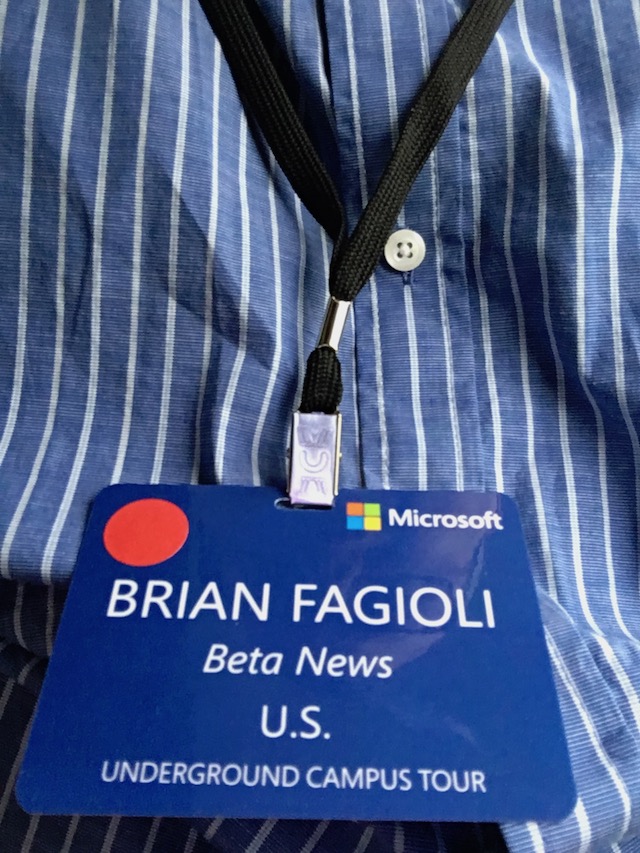 Was it a satisfying experience? Oh heck yeah, but I knew I was just scratching the surface -- pun intended. I don't think I got the full idea of what it is to be a Microsoft employee, but I did get to see two of the coolest areas -- Microsoft Research and The Garage. To truly get to understand the monstrous campus, you would probably need a week-long tour.