It's on: Xbox Game Pass sets a new stage in console wars 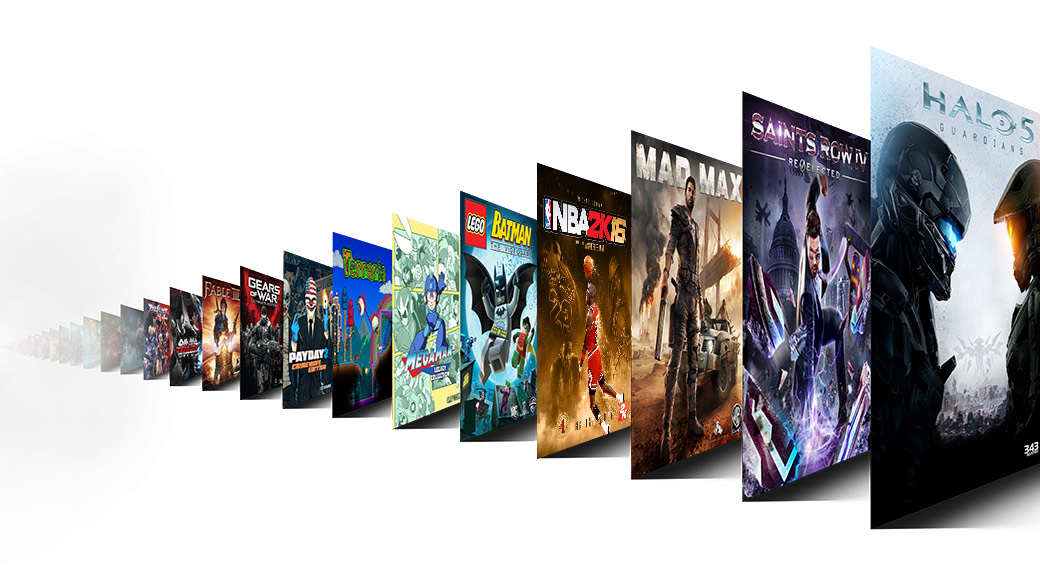 The big news out of Microsoft's video game division today is the launch of a new service called Xbox Game Pass. For a $9.99 monthly fee, players will be able to access a wide library of Xbox One titles on demand, making it less and less necessary to dole out dozens of dollars every time you want to play a new game.

This represents not only a milestone moment in the evolution of the Xbox One platform and the way people play games on it, but also for the console wars as a whole. Sony has a competing service -- similar in some ways and starkly different in others -- which means it's officially time to clear the stage for a new chapter in the perennial battle for gaming dominance.

Xbox Game Pass has already launched for those who have a premium Xbox Live Gold subscription, which remains a separate monthly service, and will roll out to all other Xbox One owners on June 1. The service debuts with more than 100 available titles (consisting of both Xbox One and Xbox 360 games). As soon as you subscribe, you're instantly able to play any and every title in that list. In other words, yes, it's basically Netflix for Xbox One games. As long as you keep your subscription, you can keep playing. Microsoft says it will continue to update and add new titles to the burgeoning collection on a monthly basis.

One of the most distinctive features of Xbox Game Pass is that it lets players download any of the available titles so they can play offline -- offline titles are available for 30 days at a time. Streaming high-intensity, multi-gigabyte game files in real time requires a very healthy Internet connection, so breaking down that barrier is certainly a way to broaden the appeal and reach of the service.

But of course, Microsoft is not exactly breaking new ground here. Sony launched a similar -- but not quite the same -- service in 2014, called PlayStation Now.

That platform (also completely separate from Sony's premium PlayStation Plus subscription service) only consists of games that were released on the PS3. It was more of a call to answer the fact that the PS4 doesn't have any kind of backwards compatibility. However, it has grown since then to be a multi-platform service that allows even non-PlayStation owners the chance to play a wide library of PlayStation games. 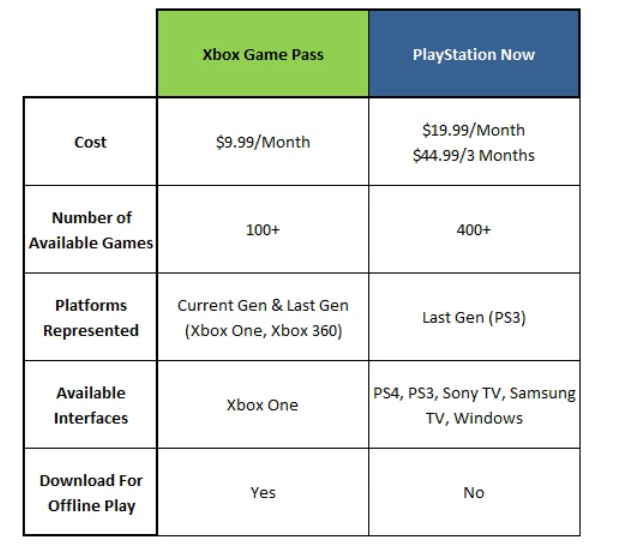 Crushingly, however, PlayStation Now is $19.99/month -- double the cost of Xbox Game Pass. Though there is a three-month option for $44.99, bringing the effective monthly fee to around $15. Additionally, PS Now has no downloadable option: you must have a high-speed Internet connection to play at any time.

That's kind of an ironic twist, since Sony once publicly shamed Microsoft in a crowd full of PlayStation fans, in the months leading up to the Xbox One launch when Microsoft had once suggested that its new console would need to sporadically connect to the Internet.

It's slightly counter-intuitive that the video game console market -- the market saturated with the highest-end technology and one that is engulfed in online connectivity -- still has one of the most prevalent physical footprints in terms of content media. That is, it's still very common practice for consumers to buy $50-$60 packaged discs. It is not quite yet a dying market the way physical Blu-ray Disc and DVDs are. The switch to online-delivered, on-demand delivery of this content is not only inevitable, it's overdue.

ALSO READ: Microsoft will pay you $25 to use Groove

Moving forward, the battle will be less on hardware and more on who can provide that experience in a better package. Microsoft has been forced into a position of playing defense from the early days of the Xbox One, not the least of which is because of some of its earlier concepts (like the aforementioned requirement to connect online, and previous attempts to prevent used games from being functional).

However, Xbox Game Pass flips the tables in the other direction. Sony doesn't have a PS4-games-on-demand platform. And with PlayStation Now not offering any kind of option to download games for offline play, it now appears like a hamstrung service by comparison.

But PlayStation Now's much wider library, and even more notably, its reach across multiple operating systems outside of the Sony ecosystem, makes it a valuable and worthy competitor as well. Sony has said for years that it wants to bring PS4 titles into the service (as well as PS2, original PlayStation, and PS Vita titles), but until now it had little real motivation to do so. That probably changes as of today. And if Microsoft really wants to shift the way gamers consume new content, it's only a matter of time before it takes a few pages out of the PlayStation Now playbook as well.

31 Responses to It's on: Xbox Game Pass sets a new stage in console wars