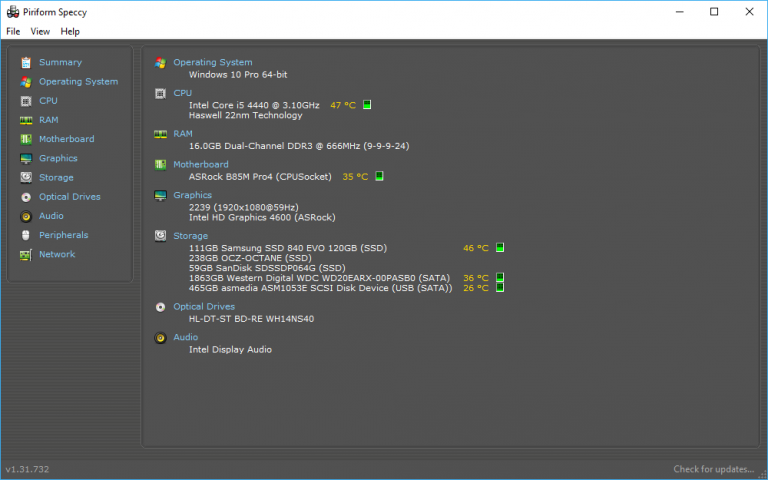 Piriform has released Speccy 1.31 and Speccy Portable 1.31, an updated version of its system information tool for Windows PCs. Version 1.31 comes with the promised of improved compatibility with the recent Creators Update release of Windows 10, and provides users with the ability to get detailed stats about their computer for diagnostic or sharing purposes.

Users can then drill down further using the left-hand navigation pane -- in addition to dedicated sections for key components, there are sections for peripherals (such as mice, printers and webcams) and networking too. Selecting one produces more detailed information and stats -- for example, multi-core CPUs come with temperature readings for each separate core along with their current respective speeds, all dynamically updated in real time.

The Operating System section also includes handy extras, such as a list of scheduled tasks, running Services and where system folders point to.

To help with diagnoses, users can save snapshots of system information for loading into Speccy on other machines, or they can export information in XML or text format for sharing more widely -- say when requesting support online. Users can also minimize the app to the Taskbar Notification Area where a dynamically updated figure makes it easy to monitor a specific component’s temperature over a period of time.

It’s this attention to detail throughout the app that make it such a valuable tool for any PC enthusiast’s toolkit. Speccy 1.31 and Speccy Portable 1.31 are both freeware and available for download for PCs running Windows XP or later. A Professional version can be purchased for $19.95, which includes automatic updates and premium support.