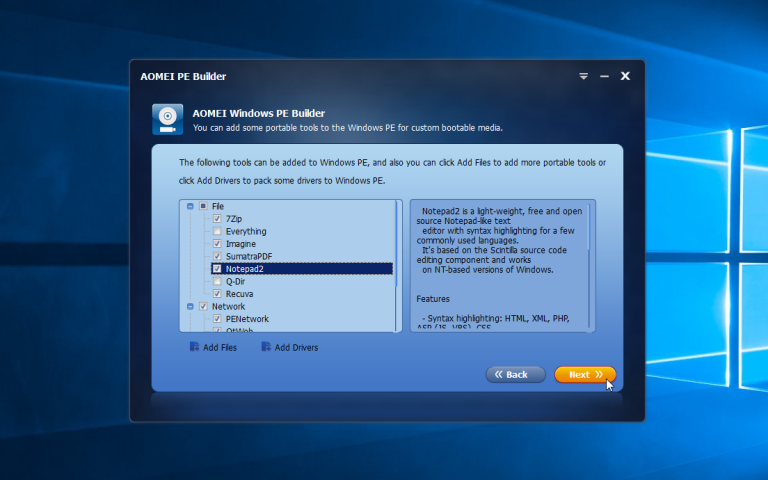 Three years ago, AOMEI unveiled the first version of PE Builder. We were thrilled, because it provided a simple -- yet flexible -- way of creating the Windows equivalent of a "live" Linux CD, whereby you can run a graphically friendly operating system direct from CD/DVD or USB flash drive.

After a few updates, the software appeared to have died -- with only support for Windows 7 and 8. Imagine our delight, then, when we were informed that AOMEI PE Builder 2.0 had been released.

Version 2.0’s headline new feature is -- of course -- updated compatibility. Now it’s possible to create your bootable recovery disc on any version of Windows stretching back to XP and going forward to the latest build of Windows 10.

Another welcome improvement is support for dual-boot functionality, allowing your recovery disc to be used on both modern UEFI PCs as well as older machines running a legacy BIOS. Previously you had to choose between them; no more.

Some of the built-in tools -- notably AOMEI’s Backupper and Partition Assistant utilities -- have been updated, while users can now cancel the media creation process once it’s started. Rounding off the update are fixes for known issues.

How it works
A refresher: PE Builder is based on Microsoft’s own Windows PE environment, a cut-down (but graphically similar) version of Windows itself. You don’t need to install the hefty Windows Automated Installation Kit either, PE Builder grabs everything it needs during the boot disc creation process.

The basic Windows PE environment provides you with a full Windows desktop complete with key Windows tools including critical Control Panels, the command prompt and Internet Explorer for troubleshooting over the web.

But that’s not all: AOMEI PE Builder then adds in two useful AOMEI utilities: Backupper for recovering accessible files by backing them up, and Partition Assistant for more sophisticated partition management (including partition recovery), as well as a handful of portable apps -- including file recovery tool Recuva.

Once launched, you’ll be stepped through a wizard putting the components together. You’ll see exactly which portable apps are supplied as standard, but you can also add your own portable apps here too, as well as any specific drivers you might want or need.

Once done, you’ll be prompted to burn a CD, save to USB drive or create an ISO file, and your bootable recovery tool is ready to go on standby.

And should the worst happen and your PC fails to boot, you’ve now got a means of booting into a familiar Windows-like environment, giving you a great opportunity to troubleshoot your problem, hopefully find a repair or at least recover critical data.

AOMEI PE Builder Free 2.0 is available now as a freeware download. The PE builder tool itself supports Windows XP, Vista, 7, 8, 8.1 and 10 and bootable media should work on any version of Windows.