Net Neutrality will die, so let's take the profit out of killing it 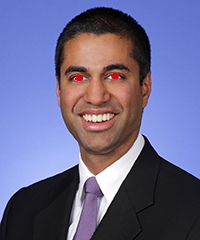 The U.S. Federal Communication Commission, under the leadership of chairman Ajit Pai, will next week set in motion the end of Net Neutrality in the USA. This is an unfortunate situation that will cause lots of news stories to be written in the days ahead, but I’m pretty sure the fix is in and this change is going to happen.

No matter how many protesters march on their local Verizon store, no matter how many impassioned editorials are written, it’s going to happen. The real question is what can be done in response to take the profit out of killing it? I have a plan.

The concept of Net Neutrality is bound in the idea that Internet Service Providers (ISPs) are common carriers like the phone company. Phone companies like to claim they have no knowledge of -- and therefore no responsibility for -- the words that are carried over their phone lines. They serve Ruth Bader Ginsburg and the Russian Embassy alike -- just as long as both pay their phone bills. Tony Soprano and Tony Stark are the same in phone company eyes. And this is true of the Internet, too, at least for the next month or so, because the FCC under President Obama declared Internet Service to be a common carrier. That’s about to change, and with it the requirement that all Internet bits be treated equally. People who are willing to pay more will soon get measurably quicker Internet service. And big bandwidth users like Amazon and Netflix will have to pay more to avoid having their signals slowed down.

How bad it will actually be is anyone’s guess, but we’re likely to not notice very much initially. It’s only later when we’re all mainly worrying about Justin Bieber marrying Selena Gomez that the ISPs will first raise Hulu’s bill and then ours. It’s just a dollar per month, they’ll say. But do the math and for residential service alone that’s $1.5 billion per year in pure profit just from consumers, with as much or more also taken from video streamers and the like.

We are being depended upon to act like sheep -- Internet browsing sheep, if such exist -- and without a plan that’s exactly what we’ll be.

The key to my plan is that this is a rare instance where consumers are not alone. There are just as many -- or more -- huge companies that would prefer to keep Net Neutrality as those that oppose it. It’s just that the telcos and ISPs are more entrenched and have more political power.  Those companies in favor of Net Neutrality obviously include the big streamers like Amazon, Hulu, Netflix, YouTube and a bunch of others. They also includes nearly every big Internet concern including Google, Facebook, Apple, and Microsoft. Those are some pretty big friends to have on your side -- our side.

The problem has been that, other than complaining to Congress, there has been no possible joint action that could bring all the pro-Net Neutrality players together. Netflix isn’t going to boycott Comcast and if Comcast is your best ISP option neither are you.

So I suggest we all join ZeroTier (ZT), a thriving networking startup operating in Irvine, California. There are other companies like it but I just think ZeroTier is presently the best.

ZeroTier is a very sophisticated Virtual Private Network (VPN) company that has created a Software Defined Network (SDN) that goes beyond what normal VPNs are capable of. To your computer or almost any other networked device (even your smart phone), ZT looks like an Ethernet port, whether your device has Ethernet or not. Through that virtual Ethernet port you connect to a virtual IPv6 Local Area Network (LAN) that’s as big as the Internet itself, though the only users on this overlay network are ZT members.

The trick is to get all those big companies that are pro-Net Neutrality to join ZT. The most it will cost even Netflix is $750 per month, which is probably less than the company spends on salad bars in its  Los Gatos HQ. Embracing ZT doesn’t mean rejecting the regular Internet. Netflix can still be reached the old fashion way. I just want them to add a presence on ZT, too.

All it would cost is $750 per month because what they are buying is code and support, not bandwidth.

There is a fair chance watching Netflix or Hulu or YouTube over ZT would actually be faster with less rebuffering. ZT does a good job of eliminating your home router as a speed bump, for one thing, and it can enable an end-to-end bufferbloat solution as well. So this is not a sacrifice for anyone. And joining ZT for individuals is completely free.

Once all the video companies are on ZT, followed by social media and search, (don’t forget gaming!), that’s probably 80 percent of all Internet bandwidth. Then what happens if California and New York tell all the banks and all their vendors and contractors that the states will only communicate over ZT, which is after all far more secure? Then everything goes ZT.

The FCC is worried about states trying to implement Net Neutrality on their own, but that’s not what I just described. This wouldn’t be the states attempting to regulate carriers at all, just the people with whom the states do business. Even then it would be voluntary.

And it could all happen in a month -- as much time as it will take the FCC to kill Net Neutrality.

What the ISPs won’t like about this plan is that ZT traffic can’t be read to determine what rules or pricing to apply. They could throttle it all down, but throttling that much traffic isn’t really practical. And it doesn’t yield any premium revenue.

Or they could prohibit VPNs entirely except that’s exactly what we’ve spent the last decade criticizing China for doing.

What’s different here is that VPNs or SDNs have always been viewed as the enemy by media companies. But in this instance ZT is their friend, saving money, keeping the ISPs in line, and generally making the whole Internet work better.

27 Responses to Net Neutrality will die, so let's take the profit out of killing it