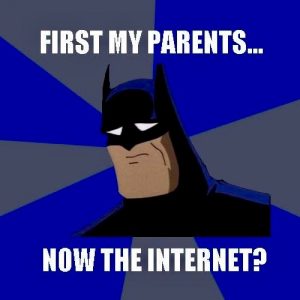 I began writing the print version of this rag in September, 1987. Ronald Reagan was President, almost nobody carried a mobile phone, Bill Gates was worth $1.25 billion, and there was no Internet in the sense we know it today because Al Gore had yet to "invent" it. My point here is that a lot can change in 30+ years and one such change that is my main topic is that, thanks to the GDPR, the Internet is no longer American. We’ve lost control. It’s permanent and probably for the best.

Before readers start attacking, let’s first deal with the issue of Al Gore and the Internet. What Gore actually said to Wolf Blitzer on CNN in March, 1999 was "During my service in the United States Congress, I took the initiative in creating the Internet." And he did. In 1986-1991 Gore sponsored various bills to both expand and speed-up what had been the ARPAnet and allow commercial activity on the network.

While one can argue that an Internet of sorts was inevitable, the one we actually got where people are buying and selling stuff and looking at dirty pictures came about with the very real assistance of Al Gore.

As the home of the ARPAnet, the United States called the shots when it came to the early growth of the Internet. The Internet Engineering Task Force (IETF) was initially created by the U.S. government as was the Internet Assigned Numbers Authority (IANA) and ultimately the Internet Corporation for Assigned Names and Numbers (ICANN) which handles Whois lookups and Domain Name Service (DNS) since its founding in 1998.

I’ll point out here that the Internet version of this rag, which you are reading right now, began in April, 1997, before ICANN was even created.

Finally getting to the news, ICANN is having some of its power stripped away by the European Union, which has found that ICANN’s Whois service isn’t compliant with the EU’s General Data Protection Regulation (GDPR) which is going in effect May 25th, protecting the privacy of EU citizens. This has been coming for two years and ICANN appears to have generally been ignoring GDPR, but the change is coming nevertheless.

I think GDPR is going to be important for the Internet.  It is also going to cause a number of interesting problems.

For example, I was looking at a couple of recent court cases involving Google.  Both involved people with criminal convictions on their records.  One won his legal challenge to get his conviction record removed from Google searches (his right to be forgotten), the other didn’t.  How does a company like Google determine which "right to be forgotten" requests should and should not be honored?  In these cases, since Google does not provide the source of the conviction data, shouldn’t the request be handled at the source -- the government agency that maintains the public record and provides that data? That’s how it will be under GDPR, which Google, Facebook and others say they will honor, but only for EU users.

But what if my VPN says I’m in the EU but I’m really not? What rules cover me then? In the USA that rule would appear to be the recently passed Cloud Act, also called the Clarifying Lawful Overseas Use of Data Act. For the record, I don’t like the Cloud Act, nor do I like the way it was passed.  I wonder how long before Warren Hatch will be joining the board at Google, Microsoft, or Apple?

Given the recent news about Facebook data being misplaced and misused and not very well controlled in any case, GDPR or something like it makes a lot of sense. Frankly, the smartest route might be to simply adopt GDPR globally.

In the meantime ICANN acts as though they still control the Internet, which they very much do not. If half a billion Europeans pull out of Whois are they going to disappear from the Internet? No.

So a tug-of-war continues with that May 25th deadline approaching.

As the Internet has become not just a global network but the global network, the idea that control should remain in American hands is ludicrous -- just as ludicrous as the idea that such control becoming truly international says something bad about the United States. We as a nation are not diminished by sharing control of a network used by billions of people worldwide.