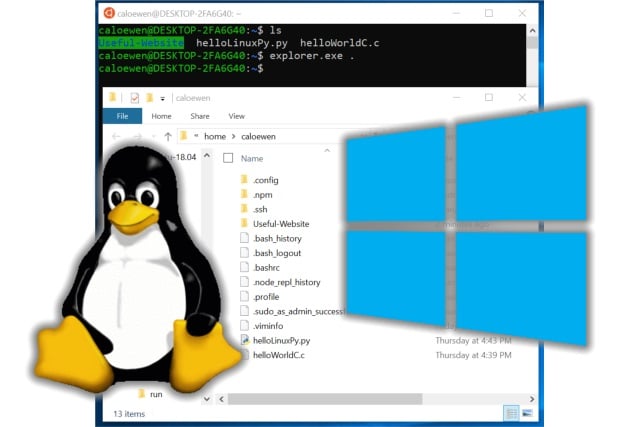 The marriage between Linux and Windows is getting stronger. Having embraced Linux with WSL (Windows Subsystem for Linux), Microsoft is now doing what users have been begging for: Windows 10 April 2019 Update makes it possible to access Linux files from Windows.

While it was previously possible to access Linux files from Windows, it was a trickier affair, and there was always the risk of corruption. But with WSL in Windows 10 version 1903, this changes. As Microsoft explains, the next version of Windows includes updates to WSL: "These include accessing the Linux file system from Windows, and improvements to how you manage and configure your distros in the command line".

In the past, creating and changing Linux files from Windows resulted in losing files or corrupting data. Making this possible has been a highly requested and long anticipated feature. We're proud to announce you can now easily access all the files in your Linux distros from Windows.

So how does this work? He goes on to explain:

To put it briefly: a 9P protocol file server facilitates file related requests, with Windows acting as the client.

We've modified the WSL init daemon to include a 9P server. This server contains protocols that support Linux metadata, including permissions. There is a Windows service and driver that acts as the client and talks to the 9P server (which is running inside of a WSL instance). Client and server communicate over AF_UNIX sockets, since WSL allows interop between a Windows application and a Linux application using AF_UNIX as described in this post.

Using the feature is very simple:

The best way to get started with this feature is to open your Linux files in File Explorer! To do this, open your favorite distro, make sure your current folder is your Linux home directory, and type in:

This will open a File Explorer window, located inside of your Linux distro.

Microsoft says there are a few known issues at the moment, and issues the following warnings: