Google Inbox is closing down in two weeks 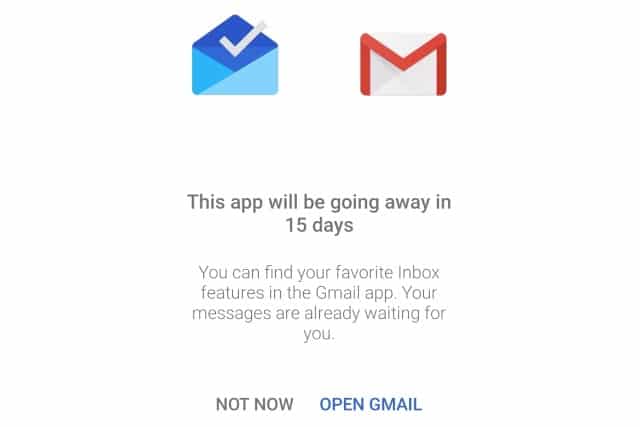 Google is far from being a stranger to launching and shuttering apps and services willy-nilly, and the latest victim is Inbox.

We have actually known for a little while that Google Inbox was due to close down -- it was just a matter of when. Now Google has revealed the closure date, and it is just two weeks away: April 2. We wave goodbye to Inbox on the same day as Google+.

Although Google has not made an announcement in the form of a blog post, press release or anything official like that, users of the Inbox by Google app have been greeted by a message informing them that the app is closing down in 15 days.

As the message first started appearing yesterday -- March 18 -- this makes the date Google pulls down the shutters on Inbox April 2.

Google is keen to encourage users to stick with its email products, saying:

This app will be going away in 15 days. You can find your favorite Inbox features in the Gmail app. Your messages are already waiting for you.

Will you be migrating from Inbox to Gmail, or do you have another app in mind?

5 Responses to Google Inbox is closing down in two weeks