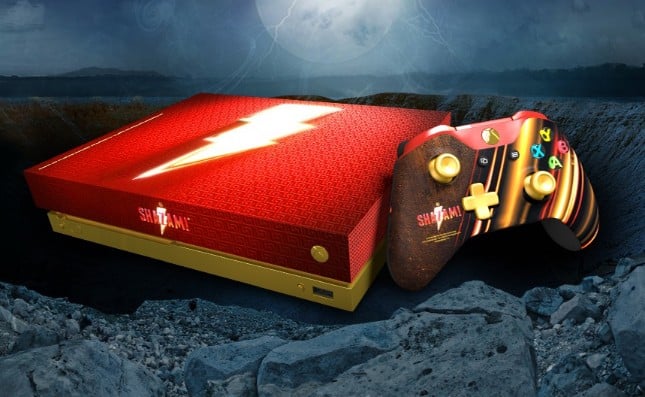 For the most part, I am not a fan of Super Hero movies or TV shows. Fighting crime with magical powers seems silly to me. As a child I loved comic books, but as an adult, I have no time for such nonsense. With that said, there are two exceptions -- Deadpool and the Christopher Nolan Batman films are enjoyable to me. This is probably because they are more adult-focused.

There is a new DC Comics movie coming out called Shazam!, and holy cow, it looks horrid (you can see the trailer below). Based on the TV commercials, it seems to be very childish and goofy -- I will skip this one. Maybe it will be good; who knows. Microsoft seems keen on Shazam!, however, as today it announces a new limited-edition Xbox One X console inspired by the film. How rare is it? There are only two, and both are being given away in a new raffle. So, yes, you have a chance to win one. The problem? It is very ugly. The colors are terrible, and the controller customization looks like it was an afterthought.

"To celebrate the release of the film, in theaters worldwide starting on April 3, we'll be giving fans a chance to bring out their inner gaming super hero with custom Xbox One X consoles inspired by Shazam!. Starting today, you’ll be able to enter for a chance to win a pair of these custom consoles for you and your best friend! We’re also giving out other prizes like a 12-month membership to Xbox Game Pass that gives you unlimited access to a library of over 100 great games on Xbox One, with new games added all the time," says Aaron Greenberg, GM of Xbox Games Marketing, Microsoft.

So, how do you enter this giveaway? Greenberg explains, "To enter, let us know what super power you think your best friend would have on Twitter, Facebook or Instagram. This is a great way to celebrate your friendship and all the gaming challenges you’ve conquered together."

So, yeah, you have to do the above while using the hashtag #SHAZAMXBOX while also tagging/mentioning the associated official Xbox account. You can read the full rules here. And hey, if you agree with me that this Shazam! Xbox is hideous, you can always try to sell it on eBay or something.