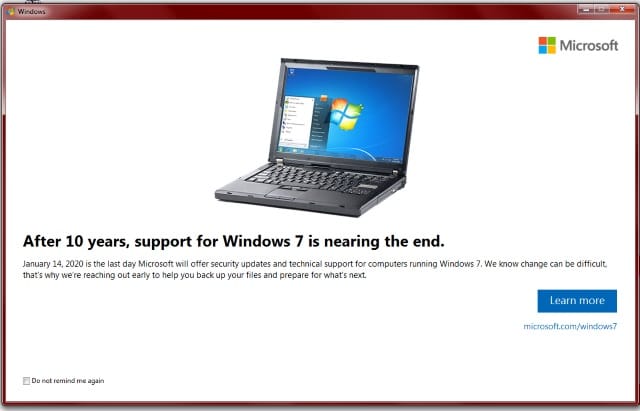 Windows 7 users have started to report the appearance of a pop-up message from Microsoft informing them that support for the operating system is coming to an end.

While this will not come as a surprise to everyone, not all Windows 7 users will be aware that Microsoft is on the verge of dropping the ageing OS. We have already seen pop-ups encouraging users to update to Windows 10 but now Microsoft is turning up the pressure, telling Windows 7 users: "After 10 years, support for Windows 7 is nearing the end".

People have been reporting that the message started appearing as early as April 18, but not all Windows 7 users are seeing it yet. The message includes a link to a Microsoft website that encourages people to backup their data, buy a modern computer and make the jump to Windows 10.

After 10 years, support for Windows 7 is nearing the end.

January 14, 2020 is the last day Microsoft will offer security updates and technical support for computers running Windows 7. We know change can be difficult, that's why we're reaching out early to help you backup your files and prepare for what's next.

Microsoft is not forcing users to give up Windows 7, and there is nothing to stop continued use of the operating system. But as the company stresses, this means you won't get any security updates.

If you're happy to stick with Windows 7 and don't want to be constantly pestered about its end of life, you can opt to hide the message and not have it display again. The choice is yours!