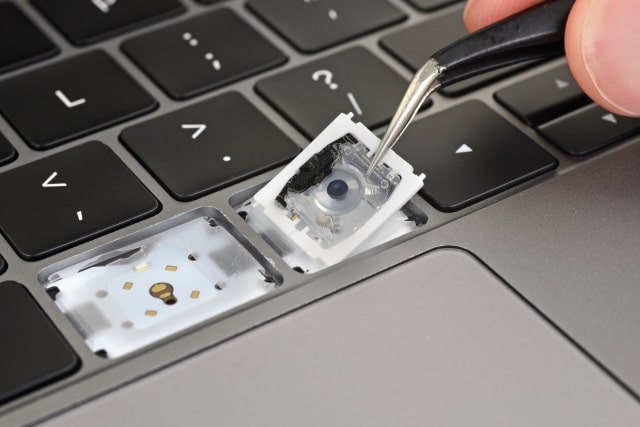 Apple recently launched its fastest MacBook Pro ever, featuring a processor with up to eight cores. But as well as speed, improvements have also been made to the keyboard design, and the material used in it.

Rather than waiting for Apple to reveal its secrets, iFixit decided to subject the MacBook Pro 15" Touch Bar 2019 to one of its infamous teardowns to find out for itself. Scientific analysis of the material gives an insight into its composition.

The teardown reveals that Apple has used a new plastic to protect the key switches. iFixit says: "where 2018 models had a rubbery feel and milky look, this plastic is crinkly and transparent". To find out exactly what has changed here, Fourier Transform Infrared (FTIR) spectroscopy was used to fingerprint the material. The results shows that Apple is now using polyamide -- or nylon -- rather than the polyacetylene used in last year's models.

In its teardown, iFixit also notes:

The metal dome over each key switch is subtly different, too. It could be a new surface treatment, and/or a tweaked alloy, possibly to alleviate problems with durability, bounce-back, or other issues.

These switches are also magnetized from the factory. Best guess as to their composition: ferritic stainless steel, with a thin polymer coating on the bottom. The difference in surface finish from the 2018 version to the 2019 indicates Apple may be using a revised heat treatment, or alloy, or possibly both.

One of the main purposes of iFixit's teardowns is to determine the repairability of devices. Here, Apple is found wanting:

The fundamental problem with this laptop remains -- if the slightest thing ever goes wrong, you'll be replacing half the machine. Even if the keyboard is perfect this time, you're taking a gamble on everything else. Our advice? Save your money.

The repairability score is just 1/10.