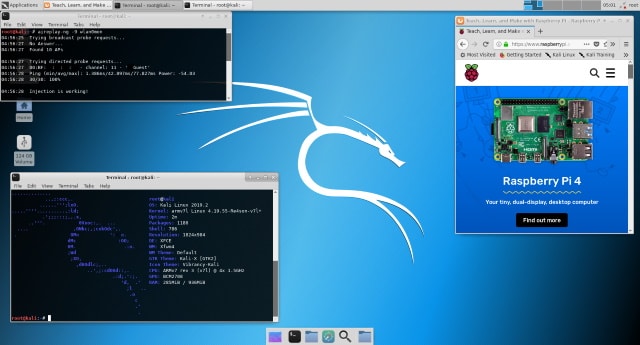 The new build of the security-focused distro comes just two weeks after the launch of the Raspberry Pi 4, the most powerful version of the mini-computer yet. Offensive Security says that the new build takes advantage of everything the Pi 4 has to offer.

The Kali Linux team says that in addition to the impressive hardware of the new model, the Pi 4 now also benefits from Kali Linux support complete with on-board Wi-Fi monitor mode. At the moment, Kali Linux for Raspberry Pi 4 is only available in a 32-bit variant, but a 64-bit version is promised "in the near future". Offensive Security says that because of the popularity of Kali on previous versions of Raspberry Pi, it moved quickly to support the latest version.

Getting up and running is no different to installing Kali Linux on previous versions of Raspberry Pi, and you'll find full instructions here.

If you're happy to stick with the 32-bit version of Kali Linux for Raspberry Pi 4, you can grab it from the Kali ARM download page. If not, you'll just have to wait a bit longer for 64-bit support.

One Response to Kali Linux arrives on Raspberry Pi 4